Preparing the New Bed & in The Potting Shed

We’ve had some shocking weather but I have at least made a good start on the new no-dig bed and nearly kept up with the sowing plan in the potting shed. 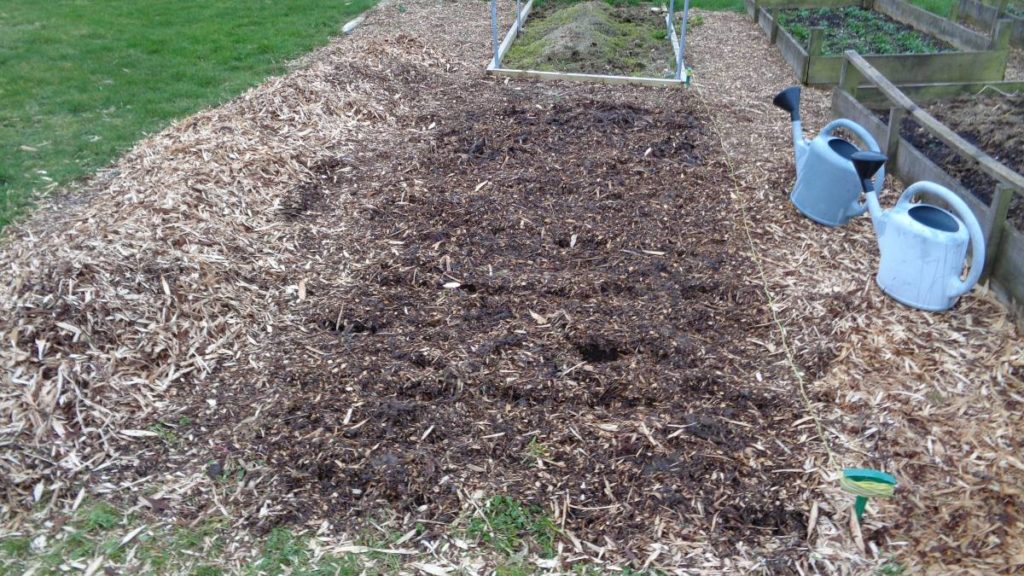 Made a start on the new no-dig bed. The area has been under woodchips for about a year now. It’s had three or four layers put down over the year as it’s where we’ve been tipping new deliveries. The surface looks like it did when put down, no sign of breaking down.

Ha! This was a job that gave me a chance to use my new Wolf Garten 40 cm / 16 ins rake. It’s ideal for large areas and cleared the surface easily. Underneath the surface though, I was surprised how the chippings below had rotted down. Not fully broken down but near.

I thought about shovelling it up and moving it to the compost bin to finish off but, to be honest, that looked like an awful lot of work. Also, why? It’s going to be covered with soil and compost anyway which will promote its rotting down and in the meantime it’s almost a growing medium. It will retain water in a drought – so common here in Snowdonia. Honest!

Opening the Soil Up

Having cleared the surface, I went across the bed with the fork, sticking it in and bending it to about 45º causing the surface to heave up and opening up cracks in the soil below. I went quite methodically; side to side in rows about 15 to 20 cm apart.

Although they’re adding humus as they breakdown, the bark peelings / wood chips will have little in the way of nutrients, so quite a heavy dressing of fish, blood and bone. They’ll probably still be sucking nitrogen in as they decompose too. A negative fertiliser. So I went to look for some urea (a pure nitrogen fertiliser).

This will prevent nitrogen robbery from the soil and compost above. The urea was mixed with water and sprinkled on with the watering can. Urea is around 40% nitrogen – twice as strong as sulphate of ammonia – so a handful per can is plenty. The bed took 2 cans, 20 litres of the mix.

In true North Wales style, it then started to drizzle. They say the Eskimos have 15 words for snow – if that’s true the Welsh should have 25 for rain! Play was suspended and I returned to the pavilion for tea. The rain will wash the fertiliser in so not too bad.

In the Potting Shed 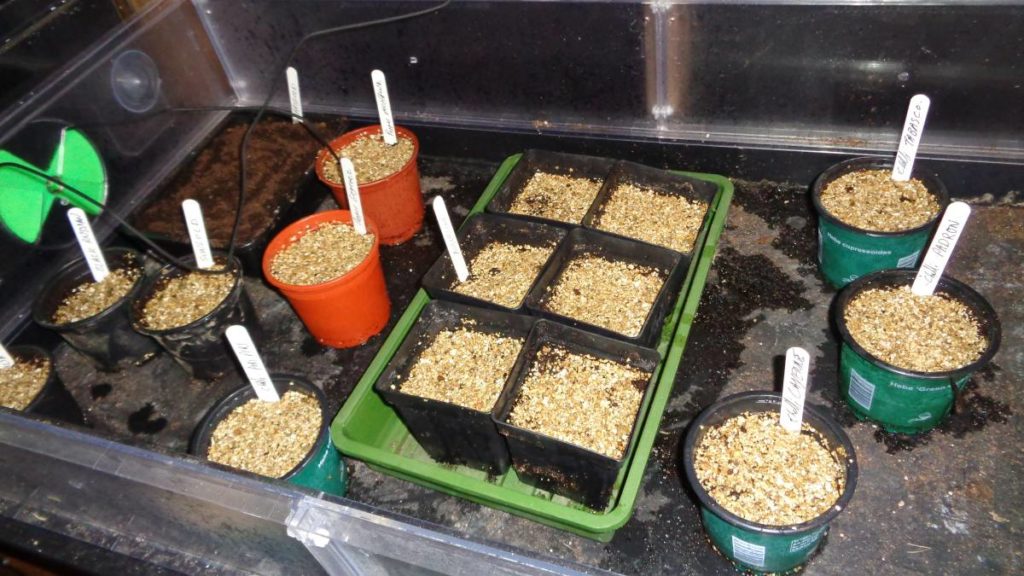 Following my plan, I have sowed the following:

Chilli Peppers sown in 3” pots to prick out

Sweet Peppers sown in 3” pots to prick out

Tomatoes sown in 3” pots to prick out

All the above went into the Vitopod set at 24ºC. By sowing into 3” pots rather than trays or modules, I save space so they’ll all fit into one propagator. When I prick them out into pots they’ll take more space but at this stage I don’t know what the germination rate will be on the seeds. Some have been in store for a couple of years, now.

If everything germinates and gets grown on, I’ll have enough to open up a market garden! In practice, of course, just because a seed comes up doesn’t mean I’ll move it to the next stage. For example, 2 each of the chilli peppers is more than enough but I may pot on a few more and give them away if I can find a taker.

2 comments on “Preparing the New Bed & in The Potting Shed”