The weather is a bit erratic – what’s new? You may ask. At least we’ve had a couple or three nice days. Unfortunately I’ve been a bit tied up with work as well. Why do the work panics and sunshine come on the same day? 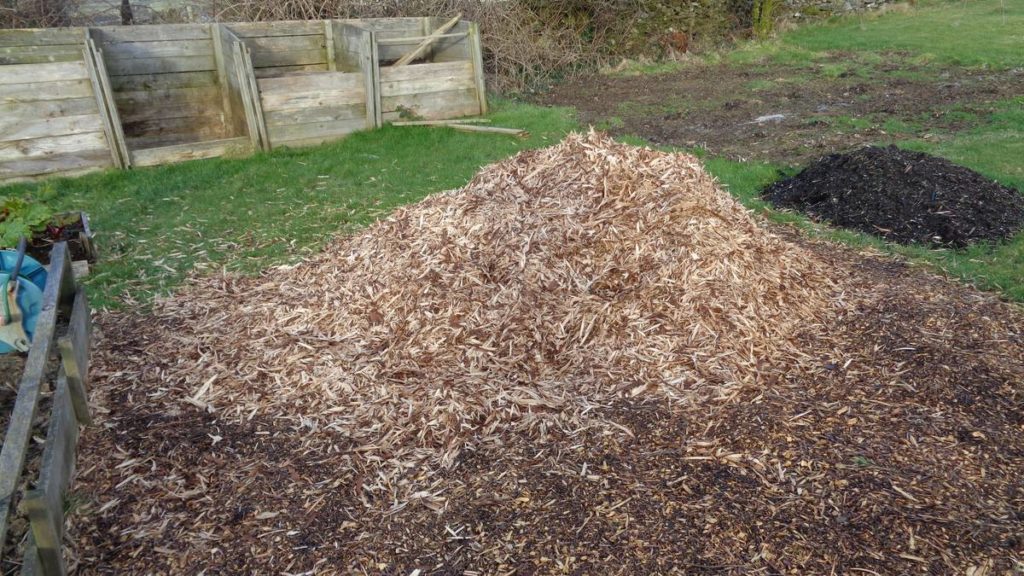 Pile of Bark Peelings Woodchips, Compost Bins Behind and Pile of Compost to the Right

Anyway, my great neighbour took me down to the sawmill where we loaded his big trailer with bark peelings. I wanted a load for the terraced area below the chicken run and some for the chicken run itself.

I had thought about putting some fruit bushes below the chicken run but the problem with that area is it’s a bit tricky to work in. After I fell off the edge, (only two feet) I decided it had to be a very low maintenance area.

Val wanted it to be a decorative border with bushes, so that’s what it’s to be. The area has been heavily mulched with grass clippings for a couple of years and the soil is much improved. Fertile, friable and with a reasonable worm population. It has been limed, so the pH is reasonable, around 6.0 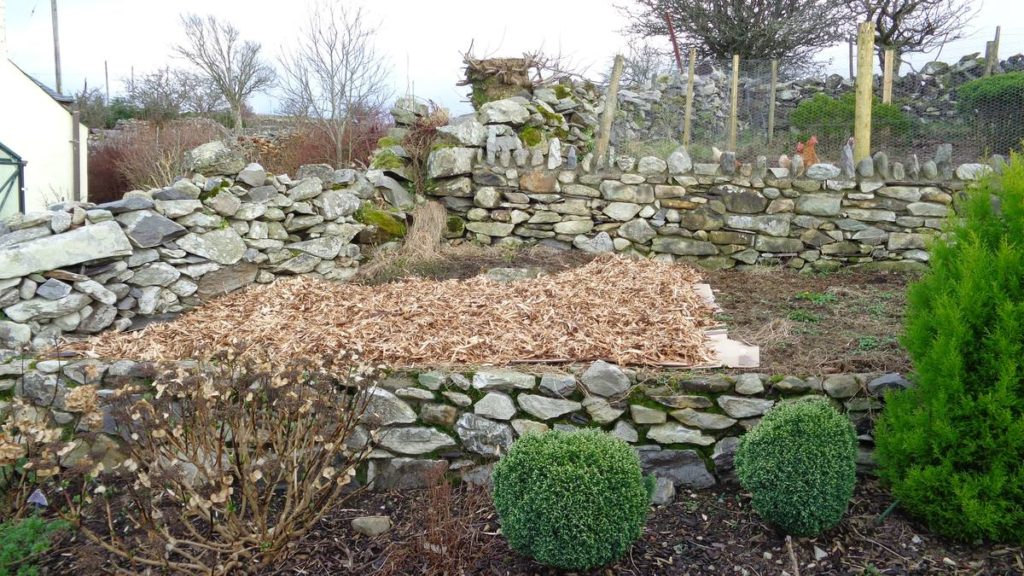 Covering the Terraced Border with Mulch of Woodchips over Cardboard

As weeds love good soil and it has to be low maintenance, the plan is to cover with cardboard and a layer of bark peelings. This will stop the weeds that are already popping up as spring is near. Then the bushes will be planted through this mulch.

Cardboard is a Resource

We save cardboard and it’s an eye opener how much we generate. Our books to sell come in boxes of course but you don’t realise how much is delivered now until you start keeping the boxes. Like grass clippings, a waste problem has become a valuable resource for our garden. Cardboard is basically adding carbon to the soil as it rots in.

What I don’t quite understand is why the bark peelings don’t blow away. Certainly the cardboard wouldn’t last minutes in the wind but cover with peelings and it stays put. Regardless, it works even if I don’t know how. 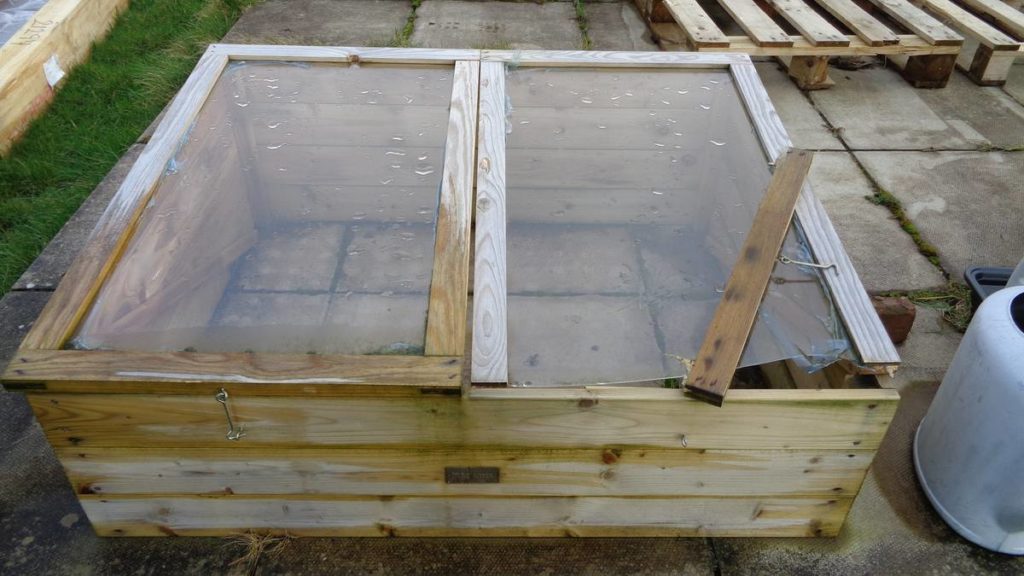 We’ve had yet more strong winds and this time they got one of the cold frames. It flipped one of the lights open and broken the frame along with the plastic glass. I can bodge up a repair with some mending plates but annoying all the same. 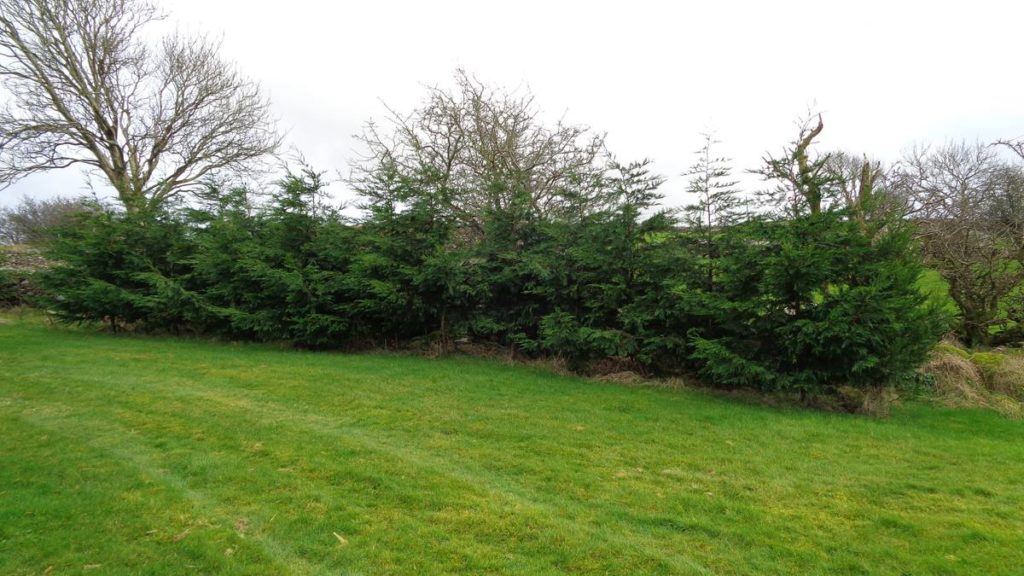 We do get strong winds here, the Atlantic storms hit us after rampaging across the Irish sea and charging up the hill from the sea side without any obstructions. That’s one of the reasons I’ve planted so many trees but they grow slowly here. Still, one day they’ll calm our local winds. 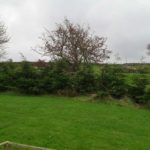 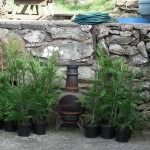 Having said that, the leylandii are already as high as I want after 4 years. I need to snip off the tops and let them carry on bushing out. I’ve snapped a photo of them as they are now to compare with the November 2017 photo and when we got them in 2015.