A little drop of rain

We had some rain this morning – not a lot, about 2 mm, but it did freshen things up. I’m hoping this heatwave doesn’t break with thunderstorms and torrential downpours because the baked ground will not absorb it.

We’ve had that happen here when the ground has been saturated and it rains heavily. The result was sheets of water rolling down the hillside at us and jets of water breaking through the walls at the back. The track to the side of the house became a stream and the stones swept down to the bottom.

Working outside even when the sun’s heat has begun to wane isn’t so easy. Not just the pollen making me sneeze – and thank goodness for anti-histamines – but the blasted biting horse flies. Vicious, horrid things that leave behind blood spots where they’ve fed that later turn into hard itching lumps for a couple of days.

When I was planting out my leeks the horseflies got my arms a number of times and despite anti-histamine creams I felt like scratching the skin off. The itching actually woke me up and it was after dawn when I finally got back to sleep. Oh well, worse things happen at sea!

Over the years I’ve found techniques and methods that work for me but I do like to experiment and test. This year I’ve started my leeks in large, deep root trainer type modules rather than the deep troughs I normally use. I thought the enforced spacing would promote growth initially but they don’t seem to have done as well as they normally do.

The other benefit I was hoping for was that less disturbance to the roots on planting out would give better growth. We will see. 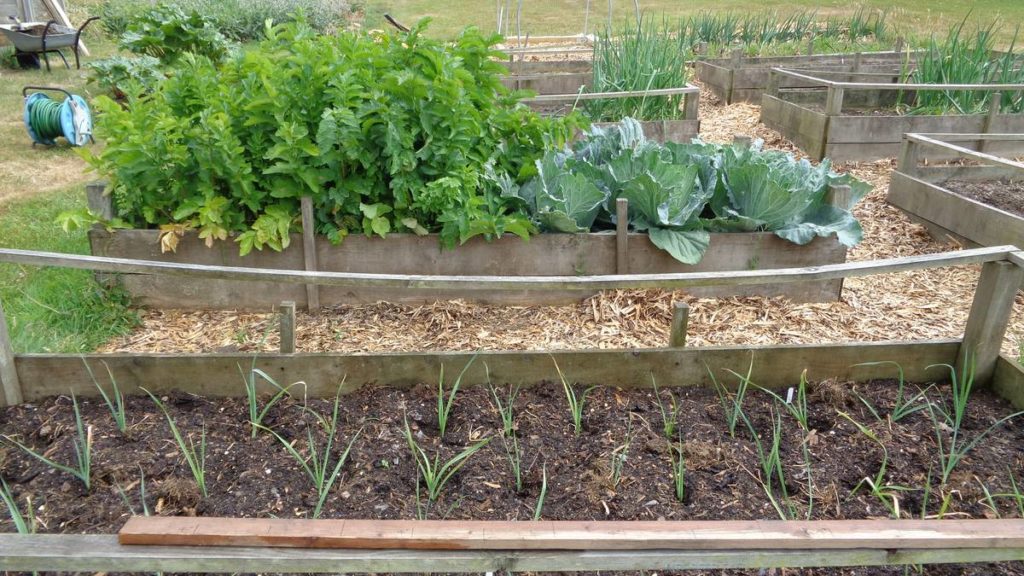 Newly planted leeks. In the bed behind, parsnips and cauliflowers

I found a pack of French beans that had fallen under a shelf in my office. My office really needs a tidy up this year!They should have been sown by 2016 so I didn’t expect many if any to germinate. Anyway, popped them into the deep module trays and I’ve had a surprisingly good germination rate. 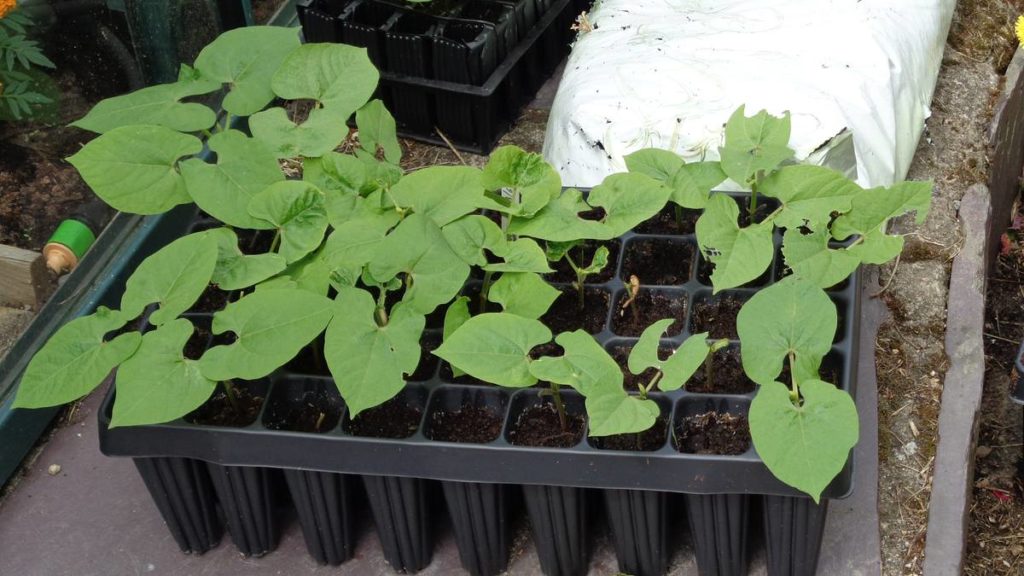 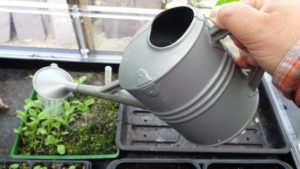 For a while now I’ve been looking for a small watering can with a fine rose for the potting shed. I’ve a fine rose that fits my ancient Harcostar 10 litre can but that’s too big to handle easily in a confined space.

Searching around online had failed to turn up anything I felt would be right, what I needed was something like the indoor can we use for the houseplants. Then, finally and very late, the penny dropped. That was the perfect can. Some negotiating with Val followed (very much like begging) and it now lives in the potting shed.

Whilst I was search for watering cans on Ebay – a mind numbing experience – I saw this 10 litre can with a handle. I thought it might help me when watering in awkward places where controlling the flow from the normal can is a bit difficult.

It is a little easier to control but not that much better. Still, it’s rather stylish and streamlined so it must go faster! 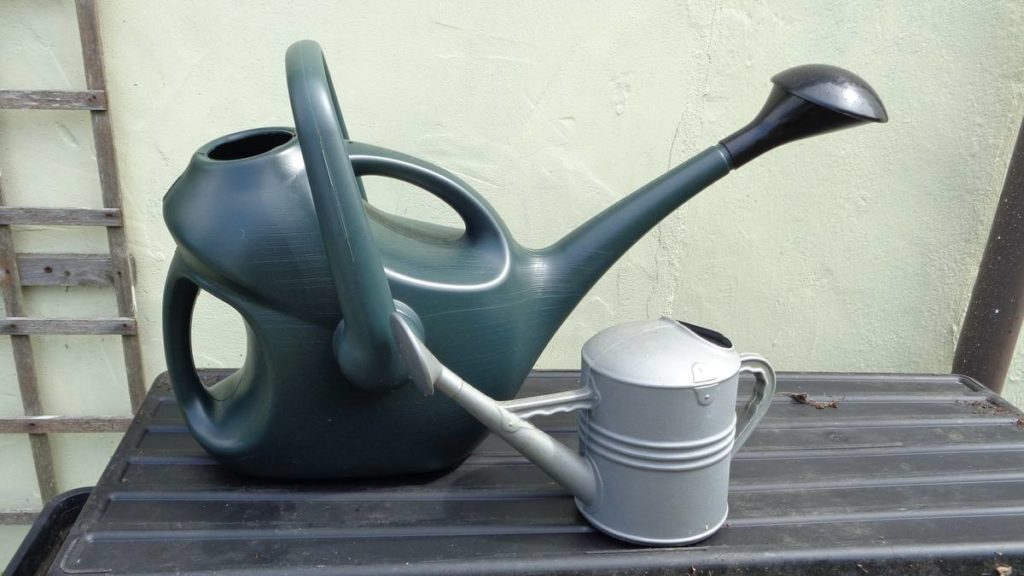 I’ve been getting alerts from the blightwatch web site warning that we’ve had a Hutton Period which replaced the old standard Smith Period. This means that our potatoes are at risk of blight. Just what I didn’t want. So far, so good – no signs of blight on the potatoes.

Although we associate lettuce with summer salads, it actually doesn’t like it too hot. Before the heatwave struck whilst it was unseasonably cold, I planted some Little Gem lettuce in the polytunnel. Few hearted up prior to bolting after it warmed up. We had a few for ourselves but the real winners are the chickens who’ve been enjoying a couple of bolted lettuce daily.

I’ve also got some Lollo Rosso on the go and they’re not doing well outside except for some I’ve planted in troughs on the lower shelf of a greenhouse bench which is spending the tomato season outside. They’re doing really well in the shade. 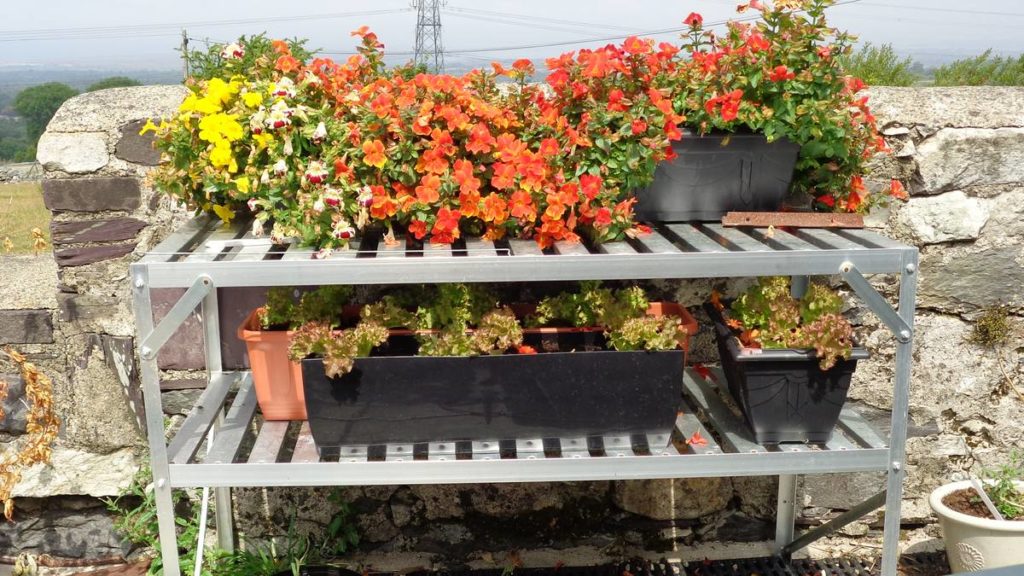 Lettuce shaded by flowers above

The autumn onions are coming ready now. I remember looking at them under the snow in April thinking I’d be lucky if any had survived, so a pleasant surprise when I saw how they were doing. Just one bolted. Don’t look at the weeds! 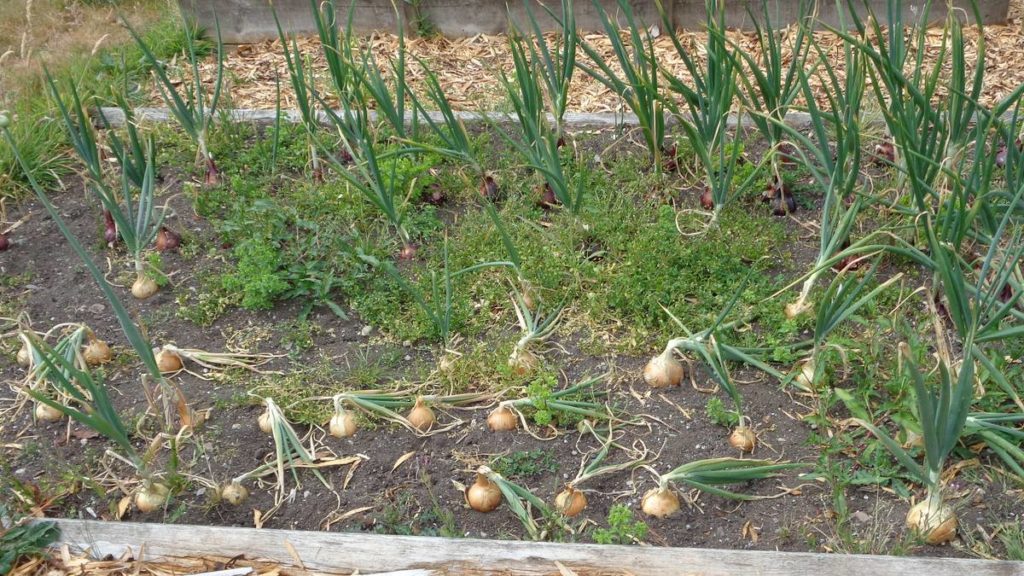 Onions Ready to Harvest – the necks are going over

There’s loads of them about. Fluttering around, busy mating and looking for places to lay their eggs. Managed to get this shot of the butterfly and the clutch of eggs (the yellow patch towards base of photo). 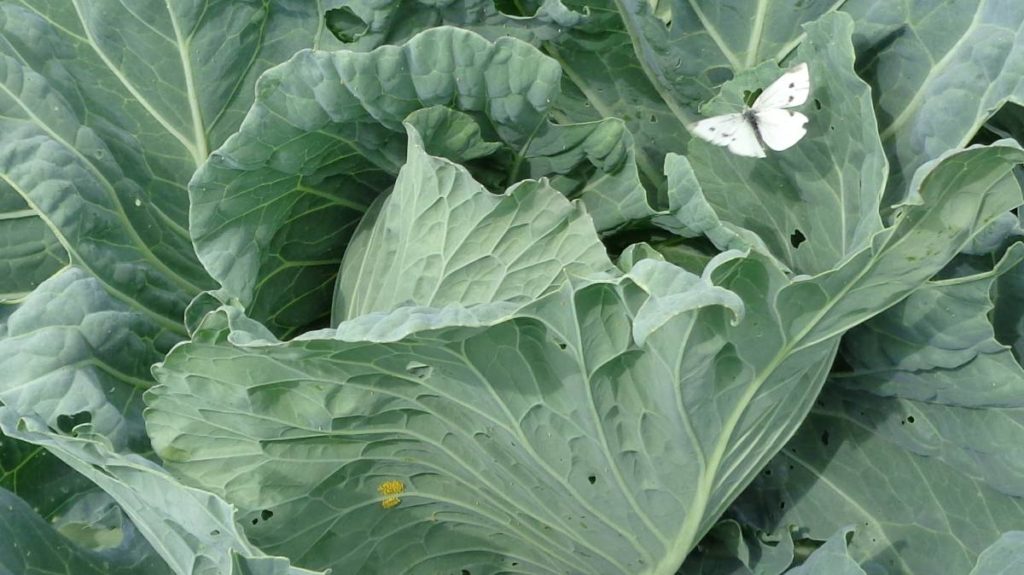 Butterfly and Eggs on Cauliflower

I then went over the cauliflowers rubbing out any eggs I found. Then I found a group of young caterpillars just starting their career of brassica eating. Best thing was to take them all off in one go with the bit of leaf they were on. 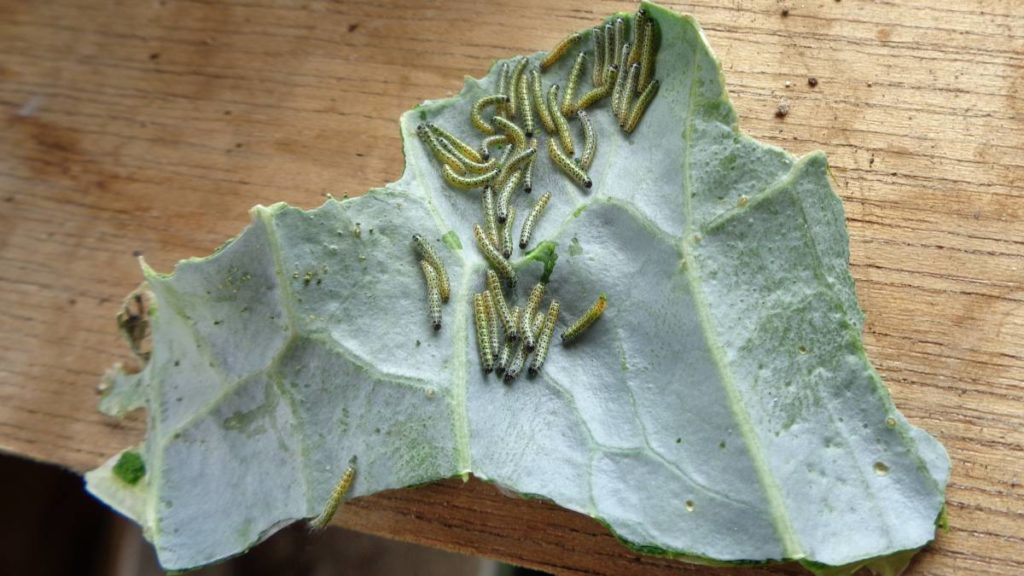