Shed Repair – Setting Up The Greenhouse 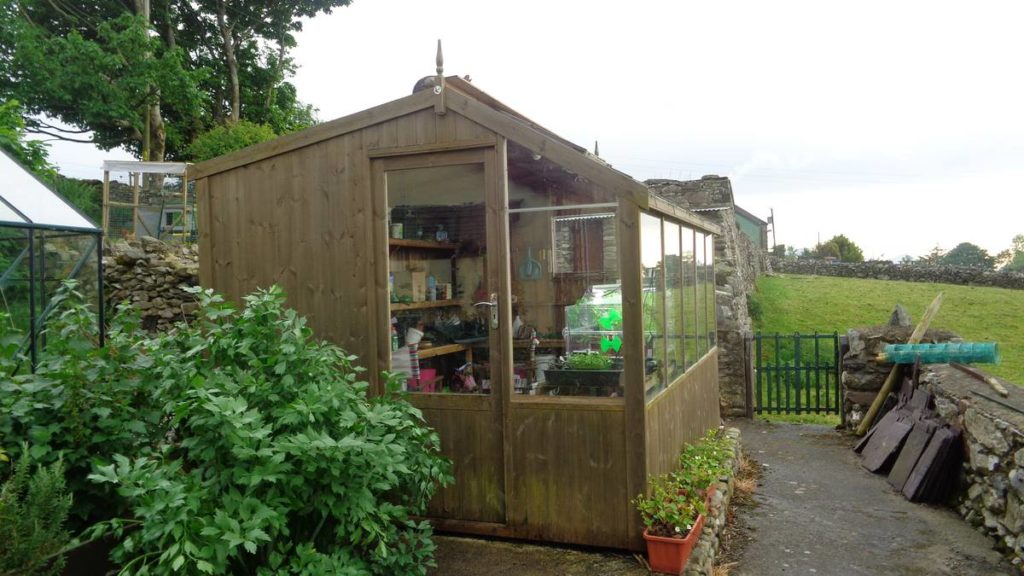 The guys from Swallow turned up to sort out the leaks in my potting shed roof. You get a 10 year guarantee from Swallow. The problem was that water was dripping in where the solid roof joined to the glass roof side and through one of the opening window vents. 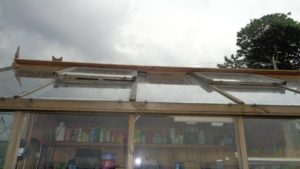 As I suspected, I wasn’t the only person to have this problem although with our high rainfall and strong winds it was probably worse for us than for people in more gentle climates. To cure the problem Swallow have tweaked the design by adding an extra capping piece along the whole ridge.

As usual, they turned up bang on time – which is no mean feat for where we are in the sticks – and had the job done in less than half an hour. They erect all their sheds and greenhouses very quickly and efficiently. No fuss or sharp intakes of breath, just arrive and get on with the task like a well-oiled machine!

With my using electric propagators and lighting, it’s critical that the shed is waterproof – even though the electrics are going through a sensitive circuit breaker I don’t want to lose power due to a water short on a cold night. The propagators aren’t the problem so much as the lighting which is why I didn’t use the Geopod lights this year (they were under a drip).

You can read more on and buy the entire range of Swallow Sheds & Greenhouses here.

Setting up the Greenhouse 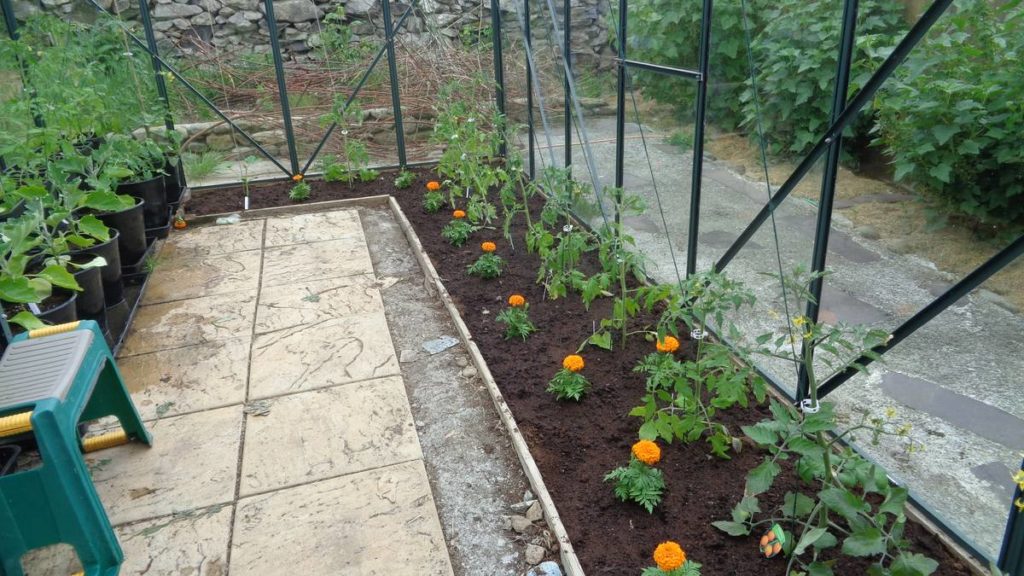 This year I’m growing all my peppers in the polytunnel as they did so well in there last year which gives me more space for tomatoes in the greenhouse. I think tomatoes will benefit from the higher light level in the greenhouse when it comes to ripening and the better temperature control I can achieve in the greenhouse with autovents, although I am using Chill Out which is formulated to protect plants from heat stress in greenhouses and polytunnels.

I’ve taken out two of the three benches which gives me enough room to set up the two Quadgrows on the slabbed base. The rest of the tomatoes go into the border along with a cucumber. The aluminium benches can spend the summer outside.

I’m growing 5 aubergines in large pots. Aubergines like a lot of light so I think the greenhouse may also be a little better for them than the polytunnel. They didn’t do very well in the polytunnel last year. The pots are in front of the quadgrows. 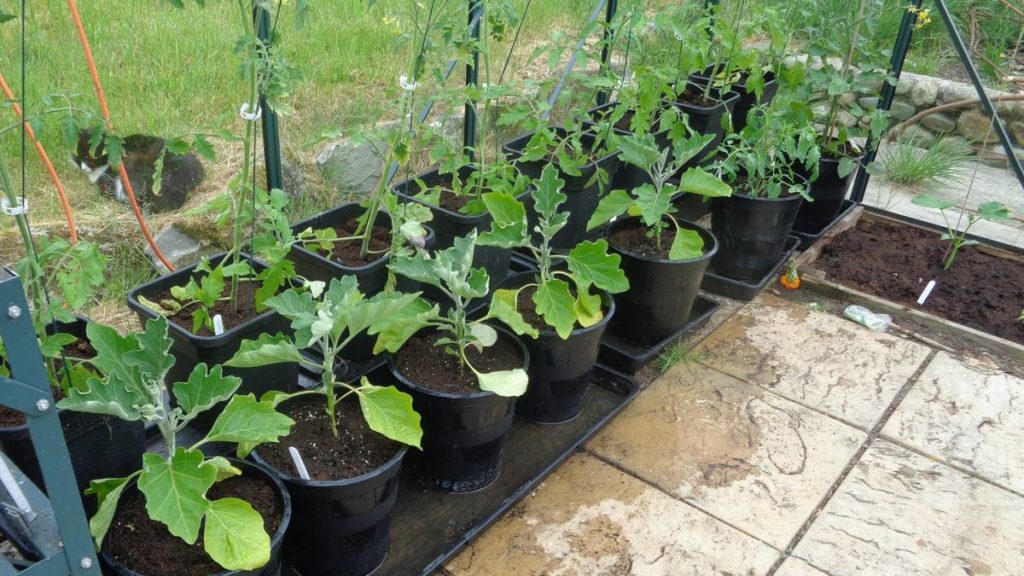 Quadgrows with Aubergines in Pots in front

The border soil /compost is a little tired so that’s had the top 4 to 6 ins. taken out to go on the veg plot as a soil conditioner. The bottom was then forked over and some potato fertiliser added along with some slow release general fertiliser to feed over the season.

This year I’m supporting the tomatoes using a thick jute string up to wires and bamboo canes supported on the cross bars. Last year I used a nylon string which is stronger and thinner – that may sound like a benefit but it can act like a cheese wire and damage the tomatoes.

Traditionally the string is twisted around the tomato stem to support the plant but it’s very easy to snap a stem as I found out, so this year I’m using little clip rings (Search Trellis tomato clips on Ebay) that go round the stem and fix to the string. At a whopping threepence each and reusable I reckon they’re a good investment! 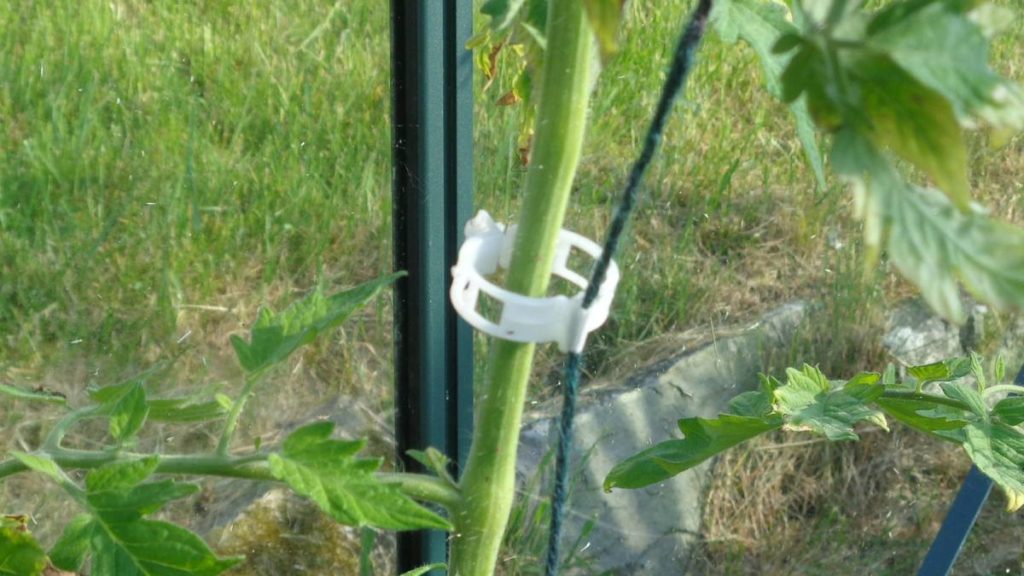 Disaster in the polytunnel

Not the end of the Earth but annoying – I bought a Femspot cucumber plant from the garden centre a few weeks ago and brought it on well in the Vitopod. It grew a little better than expected but as I planted it out the stem was damaged. I thought I’d got away with it as it seemed OK but it’s now popped its clogs.

I don’t think our cucumber leaf eating cat Amber helped it much. She may be blind but she found it using her cucumber radar. Eating cucumber leaves can’t be good for her but it doesn’t seem to harm her either.

It’s a shame as we grew one last year and they’re a decent cucumber but I’ve got some of my favourite Burpless Tasty Green plants as well so we’ll be fine.

Potatoes in the Polytunnel 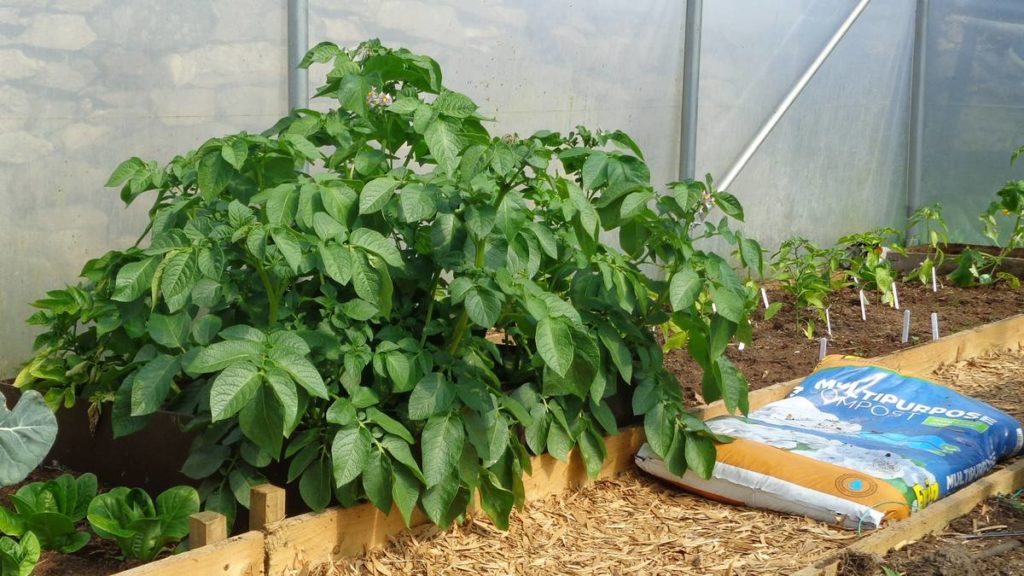 Potatoes & Peppers in the Polytunnel. These are the Homeguard which are very near ready to start harvesting. 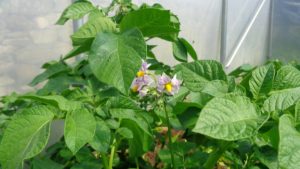 Both the Homeguard and the Arran Pilot potatoes in the polytunnel are looking good with the Homeguard being a tad ahead. I reckon we’ll be harvesting in a matter of days as both are flowering now.

I’m not much into flowers, except cauliflowers of course, but have you noticed how pretty potato flowers are? Very delicate, especially in comparison to the robust foliage.

2 comments on “Shed Repair – Setting Up The Greenhouse”