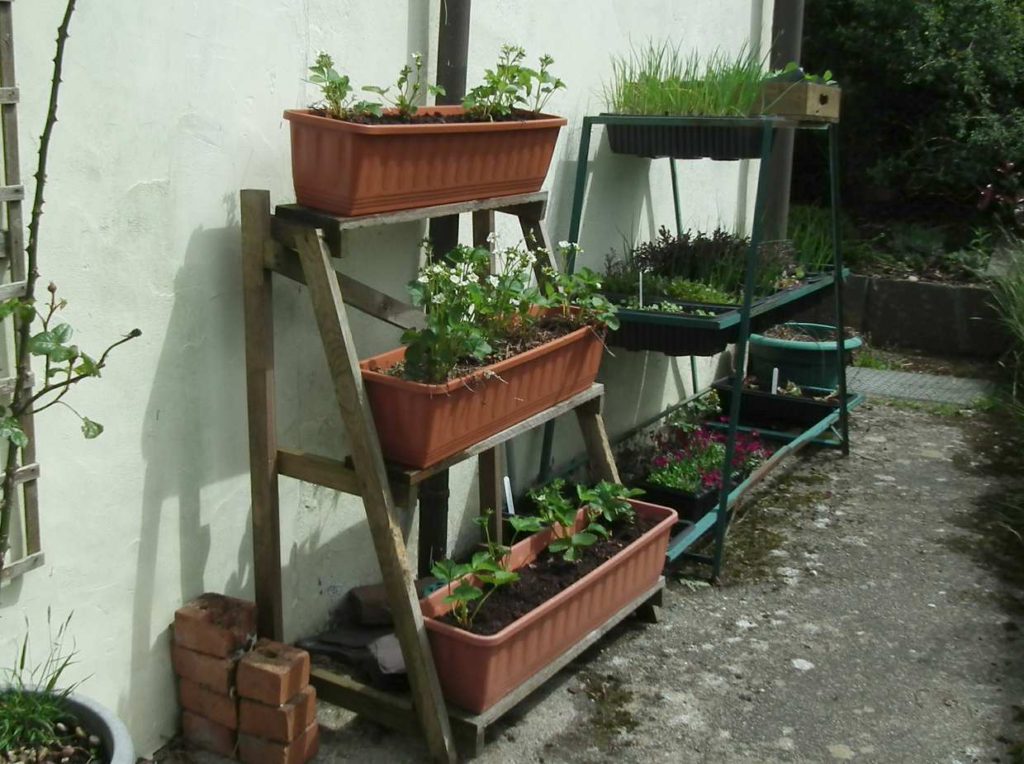 Strawberry Troughs – Salads in Planter Behind

After Monday’s storm and Tuesday’s day of drizzle the evening was lovely so went into the greenhouse to side shoot the tomatoes and start wrapping them in the support strings to climb.

On the last one, a marmande, I got distracted and used a little too much force, breaking the leader off. Curses! I’m really cheesed off. Hopefully a new shoot will appear to take the sword from the stone and lead the tomato.. not anything I can do but wait. If I hadn’t side-shooted the tomatoes  first it wouldn’t be so bad as I’d have just selected a shoot to be the new leader.

I’d posted a review of the new Quadgrow tomato growing system earlier and was thinking about about the cost / benefits of it which is what distracted me. Say it saves half an hour a day watering, that’s 3 and a half a week which at minimum wage of £7.50 an hour equals £26.50. A week! Even if the time saving was half that, it makes a lot of sense.

Cost of 2 Quadgrows is about £62.90, less 10% using the current discount code JHTEN equals £56.60. (Check here) Lasting I reckon for 10 years at least that’s just £6 a year. I think I know how next year’s peppers and aubergines are getting grown. 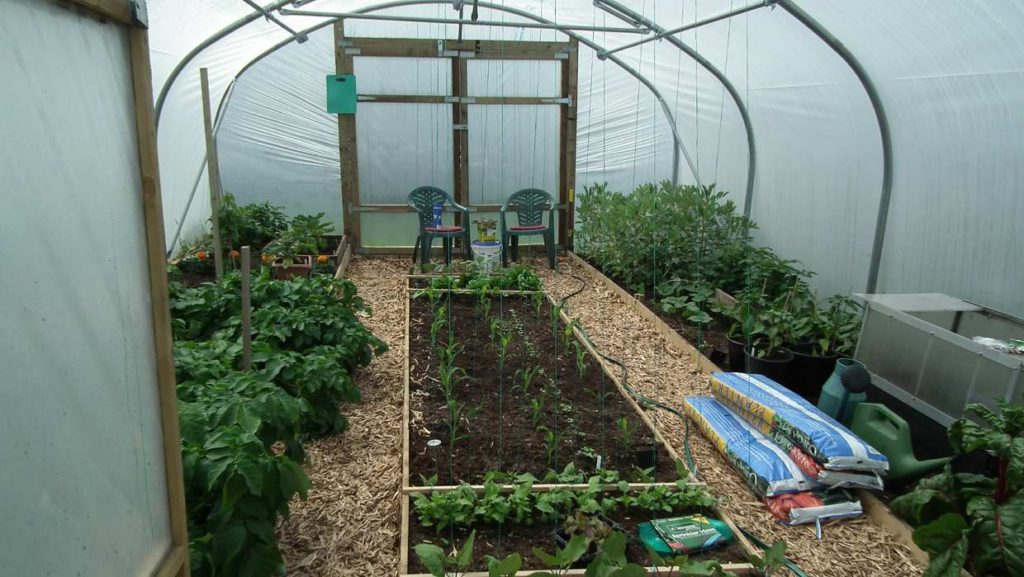 Back up in the polytunnel,everything seems to be progressing nicely. I’m convinced the carrot problem was down to the seed as I sowed some pelleted Amsterdam Forcing in the same bed and the germination rate for them is over 90%

I had a firtle (an expressive word for fiddle about that Google tells me is Cumbrian dialect) with the Sharpe’s Express potatoes in the polytunnel and it looks like we’ve got tubers! I think I’ll try and hold off lifting some for another week to let them bulk up a bit.

I’ve sown more dwarf French beans between the sweetcorn and the edge of the centre bed and planted lettuce seedlings on the other side. There are radishes in a row between sweetcorn rows and I think I’ll have time to sow another row before the corn is tall enough to shade them out. Under-sowing really maximises the use of space. You can under-sow outside as well as in a tunnel but space is really at a premium in the tunnel now.

The grow bags are for strawberries and awaiting the shelving going up.

I’ve finally got the straw to mulch the potatoes outside with. I’d been planning on going some time back but other things got in the way. Anyway, the farm is only a 10 minute drive away so I hitch up the trailer and head down there.

Can I find anyone? No, nobody about apart from some calves looking very fed up in a shed. I bet they’d be happier out on grass with their mums but that’s not the way modern farming works. After a while I give up and head back home for a cuppa.

Eventually they answer their phone and I head back down where I load 4 bales of straw and head home. 2 hours for a half hour job, not bad by local standards!

I thought I’d spread the straw the next day as I wanted to sort out my strawberries in troughs on the plant stand I knocked up a couple of years ago. Scraped off the compost at the top and weeded before adding fresh compost and watering.

My cunning plan for lots of strawberries is to grow them in the polytunnel on suspended shelves in grow bags. I might buy in cold-stored plants later in the year. The shelves will be made from 9mm marine ply strengthened with treated 2×1 and suspended by 6mm polypropylene rope from the crop bars.

The grow bags will sit in trays so the shelf isn’t soaked. The biggest problem with grow bags is watering them. I’ve tried various things to make it easier but nothing up to now has been really satisfactory. I came across a device called a Speedfeed  which looks like it should really do the job properly so jumped in with both feet and ordered 4. Fingers crossed!

Speedfeed for Growbags from Amazon