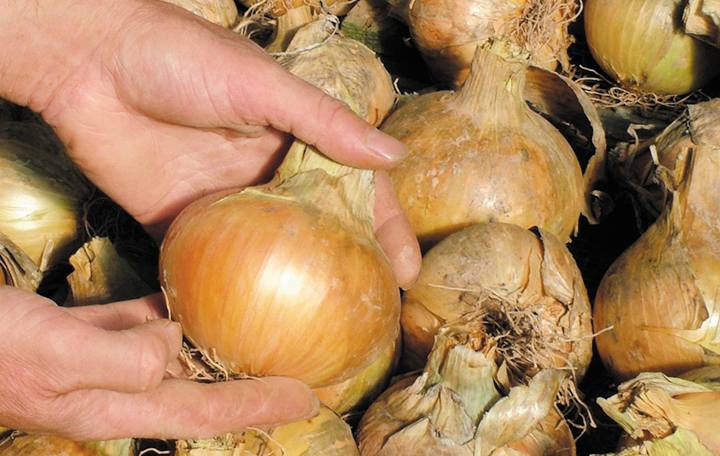 I was researching in my old gardening books and came across a number of references to an onion variety called ‘Up to Date’. First bred and sold in the 1890s, it was said to be reliable, store well and have some resistance to white rot disease. The flavour was described as so strong that the breath of a man eating an ‘Up to Date’ onion raw could blister paint!

As late as 1970 it was still rated by gardeners for it’s strength and reliability. Since I rather like strong onions I thought I’d see if I could buy some seed. Unfortunately onion Up to Date has not been available since 1973.

The reason is that it was deemed to be the same variety as Bedfordshire Champion and so not included on the National List of agricultural and vegetable plant varieties in the UK.

It may well be true that they were very similar but nobody claimed Bedfordshire Champion resisted white rot disease or was paint-blistering strong.

Before the second world war, some seed companies were less than ethical in their trading. They’d take a variety and call it by a different name, claiming wonderful things for it.

The practice declined after the war although some differently named varieties were certainly the same.

‘This confusion must cease! Order shall be imposed! Henceforth each country will maintain a list of varieties that are permitted to be sold. Inclusion on this list will permit the seeds to be sold across all the countries of the EU, which will be of great benefit to big business

And should someone market seeds that are not on the national list, they shall be prosecuted’

The main rules were that varieties should be:

All well and good so far except for two things.

For a variety to be listed the breeder had to pay a fee to register and to keep it on the register. The fees are around £2,000 per variety. This meant that the seed producers dropped a lot of varieties where sales were low.

The requirement that varieties be distinct was problematic. Let me explain why. Let’s say two people have seeds of the same variety of plant. Doesn’t matter what, could be peas or cabbage or anything.

One lives in a cold wet area of the country, the other in a warmer and drier climate like the south east. Both raise their plants and save the seeds, selecting the most successful specimens each year.

After 10 or 20 years there’s effectively two varieties that thrive in different conditions. They are similar, but not identical. The question is whether they will meet the ‘distinct’ criteria for listing. That’s how we lost Up to Date onions.

Basically the concept of the national list is good and sensible but it’s had consequences far beyond regularising the varieties.

We’ve lost hundreds of varieties that were not big sellers, varieties that didn’t sell enough to cover the fees. With their loss we’ve also reduced the gene pool, perhaps someone could cross breed Up to Date with another onion and produce a variety immune to white rot.

The costs stifle innovation. Varieties with a worldwide market to farmers will make hundreds of thousands but a non-commercial variety is unlikely to convince a company to spend the thousands to get it registered.

There is a system where an amateur, non-commercial variety can be added for a lower fee (£100.00) but even that is a lot of money for a variety with a very small market.

When we leave the EU we could, in theory, drop the list and leave control to trading standards but I bet it doesn’t happen. The system favours big agri-business on a multi-national scale and it seems to me that big business gets what’s best for big business from DEFRA

I suppose I should mention the Heritage Seed Library who keep de-listed varieties going. It’s a great idea although £18 a head to play seems to be a fair amount of money to me even if not as expensive as the Irish Seed Savers who actually offer Up to Date seed. I’d be happier to see the reason for their existence scrapped though.

2 comments on “Up to Date Onions & National Seed List”