The good news is that we’re nearly over the rotten chest cold that struck us down. This one has been hard and long. Last week I made the mistake of trying to do some work on the Monday only to end up coughing like mad. If coughing was an Olympic sport I could have added yet another medal to our tally! 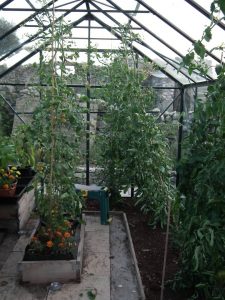 Greenhouse Tomatoes
The plants are doing fine but the fruits are really slow to ripen this year.

Tuesday was spent being a removal man for my daughter which mainly involved driving with the trailer. Not too strenuous but I was still tired by tea time.

Wednesday, finally got down to a bit of actual gardening. The field needed mowing but the grass was a bit long for the mower, even on side discharge. So ran over it once with the mower tilted back a little to raise the blades and then again with all wheels on the ground.

This resulted in long strips of mowings which had to be raked into piles and then taken over to mulch various areas of the garden, under fruit bushes etc. It’s not compost but it does improve the soil whilst keeping the weeds down.

In the greenhouse the tomatoes are going very slowly this year. The Sungold, as usual, are producing well but the rest are taking their time to ripen. I’ve stopped most of the plants now, which means they’re pushing out sideshoots to compensate.

If the weather follows its normal pattern here, things will improve soon and we’ll have a good September, cropping through to November. It’s important to keep those sideshoots from eating up the energy that the crop needs. Every time I go into the greenhouse I pull off a few I’ve missed.

Peppers are doing well and we’re giving cucumbers away so no complaints there.

What with being busy and laid up we’ve let the blackcurrants go too far but we still got about 20 lbs off the bushes. Some for the freezer but Val decided to try a new recipe for a blackcurrant jelly.

The first batch produced six jars and worked really well. So, the test run having worked she went for a larger batch which was when disaster struck. The thermometer glass broke.

The inner tube was fine so no mercury or whatever they use spilled but broken glass jam isn’t very popular. Anyway, I came to the rescue by filtering the hot liquid through double layer of muslin lining a chip pan basket.

The blackcurrants are a bit of a problem now. When I first planted them, I knew they were a little too close together but I thought that I’d get away with it as the soil is so poor growth would be slow at best.

Well it appears that the initial fertiliser and mycorrhizal innoculant combined with annual compost mulching has more than compensated for the poor soil and they’ve grown extra large, quickly.
I doubt they’ll transplant well so maybe I’ll propagate some more and plant those, replacing the old blackcurrants with something else.

I’ve a similar problem with my redcurrants except it’s not the redcurrants but the jostaberry that has swamped them. In fairness to me, I’d not grown a jostaberry before and wasn’t convinced it would be worth growing. Having tasted the berries though, it’s staying where it is.

I took another barrow load out of my hotbin composter. I have to say it is the easiest and best composter I’ve used. Just drop kitchen waste, some garden waste and browns like cardboard in at the top and take compost out of the bottom.

Leave a Comment Here on Recovering & Catching Up Cancel reply