New Gates on the Allotment

Well after the excitement of learning to kill a chicken the next day was spent playing at being handyman for my sprog. She now has a gate that will stop the hens from getting into the decorative part of the garden and the hens have a food store that isn’t falling to bits. Great fun!

We weren’t un-rewarded for our efforts, she gave us a young cat to add to our collection. He’s a handsome black and white moggy with the unusual name of Tom. Oh well, you can feed five as cheaply as four. Glad to report he’s settled in well and joining in with the rest of the gang causing havoc.

So back to the grind on Monday with a load of ‘should have been done yesterday’ web work and the final corrections of Easy Jams, Chutneys & Preserves. It’s funny, it’s great starting a book but by the end I really wish I’d said no. Then I say ‘never again’ and then the muse strikes and off we go.

Saturday I finally escaped the dreaded computer and headed round to the plot, keeping an eye out for pigs wearing sombreros. I’m British and the spectre of the black death stalking the land won’t keep me off the plot.

The first thing to greet me was a new pair of gates! The good news was the padlock was the same so at least I could get in. They’re awfully posh gates though, all spiky at the top and tough enough to stop a lorry in its tracks. Shame the fence around the site would hardly slow the average 10 year old.

Worse than the shock of the new gates was plot 29. In my absence someone has gone and planted a load of weeds all over the plot. I really couldn’t believe the state of it. Thank goodness for the trusty hoe. Gave it a good sharpening and off with the weeds.

Hoeing is fine for the annual weeds but one bed had a load of nettles coming so they were a fork job. Don’t leave the roots or they come back.

I was clever enough to wear gloves to handle the nettles until I stopped for break and then in an absent minded moment picked up a clump off the path. Ouch. New nettles really sting, don’t they. 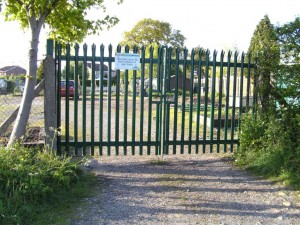 Next job was to get the trusty sprayer out an load up with glyphosate and spray the paths. I don’t really like using a herbicide spray but it’s by far the quickest way to tackle the paths. Weeds popping up between paving slabs are the hardest thing to sort.

Back round again on Sunday afternoon where the last bed on plot 29 got attacked. I was about half way through when Cara arrived, happily not with another cat. She’s now taken to harassing poor forum members into having her rescues. She was happy knowing Rosa the kitten had gone to a really good home.

Monday, what a disappointment. The weatherman promised it wouldn’t rain so of course it did. Never mind, next fine day is my day off and I spent the bank holiday working. Such is life.