Finally the weather has improved. We’ve actually had some hot sunny days and it’s as if nature has decided to miss spring and jump straight to summer. So taking what time I can out on the plots.

Over on the walled garden, which is walled on two sides, the fencing need some attention. Nothing much, just some barbed wire had come loose and needed re-stapling and the windbreak netting needed fixing. That’s one of those jobs that’s easy with 2 people and my son-in-law helped make short work of it. 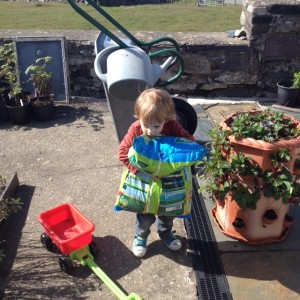 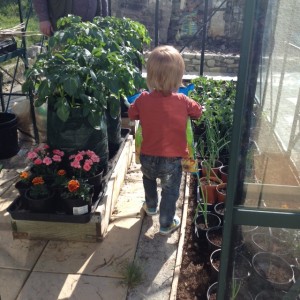 Almost there! Potatoes to the left, onions to the right.

Over in the greenhouse the potatoes in bags were all in need of their last top-up with compost. I’m a great believer in Victorian values so re-instituted child labour, enlisting my grandson who is nearly 3 to bring me bags of compost from the store shed.

Being serious, he loves helping and I was surprised he managed to carry the 20 litre bags. It took a lot of concentration and negotiating a step but he managed it. Of course, hard work must be rewarded, so a dip into Grannie’s sweetie tin was allowed afterwards.

One bag of Arran Pilot is showing flowers forming so the tubers will not be far behind. In hindsight I wish I’d started them earlier now, I can hardly wait. I moved one of the Arran Pilot bags and one of Swift outside to slow them down so I can spread out the new potatoes.

I’d planned on planting my potatoes in late March but they’re still not out. In view of the way the weather was, not such a bad thing. My daughter was talking with a farmer who grows some vegetables to sell and they were telling her how far behind with planting they are this year with the weather.

Made a start preparing though, running the Merry Tiller over the patch. What a wonderful example of British engineering at its best. Built in the days when things were solid and engineers made it a bit thicker still, just to be safe. Powered by a noisy, inefficient engine that starts every time and laughs when it runs out of oil.

The thick tines just churn through the ground kicking up the large stones and rocks that make conventional digging almost impossible as the spade blade keeps hitting the stones.

I’d sowed 80 broad beans in pots which were in the greenhouse. The final count was 78 through and they were overdue to be planted out. The roots were circling at the bottom of the pots and had to be teased out as I planted.

They’ve gone into two raised beds at 8” (20cm) spacing each way. The first bed was low so I added 4 barrow loads of compost and to both beds a couple of pounds of wood ashes for the potash and calcified seaweed at 2oz per square yard along with a good handful per yard of organic chicken manure pellets.

Mixed the lot by running over the beds with my Mantis tiller and then levelled out with the rake prior to planting. If I don’t get a good crop, albeit late, it won’t be for lack of trying.