Now here in the foothills of Snowdonia we’re used to rain. It is one of the wettest areas of the country after all. But this month has broken all records. 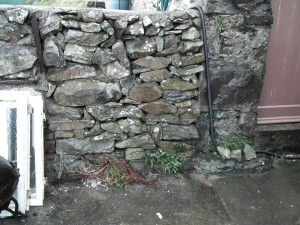 The back retaining wall. The pipe is the overflow from the water butts. The soil level on the other side is about where the top of the window lights on the left are.

The nearest weather station to us is Capel Curig and in a normal December we’d expect an average rainfall around 12 inches but it looks like we’ve had over 40 inches! The ground is absolutely sodden, so any rain rust runs downslope as it can’t be absorbed.

Behind the old cowsheds that are attached to the back of the house we had a land drain installed shortly after we moved in. The idea was to protect the sheds which are sunk about 4 feet below ground level at the rear.
The drain runs the water to the side of the shed and into a large soakaway.

What’s happened is that that the huge volumes of water have overwhelmed the soakaway and cut an underground channel to the base of the retaining wall. It’s then forced a channel through the wall and gushes out like a spring.

From there it runs down the side of the house where we already have some minor damp problems. What worries me is that, now it’s cut a channel, the soakaway will just drain out and the stream through the wall cause it to collapse. That’s without the damp problem being made worse in the house.

I’ll be getting some professional advice as to what is best to do because these things have a tendency to become worse not better once started.

Of course these are minor problems in comparison to those being suffered by many others. We’re only a couple of miles from Bontnewydd where some parts were flooded and at one point the main traffic artery into North Wales, the A55, was completely blocked due to being under water outside of Bangor 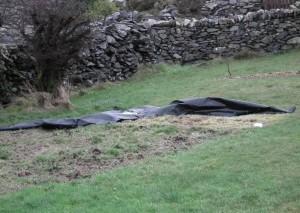 Weed matting rolled back despite staples and weights!

The other problem that’s just hit is storm Frank. Who thinks up these names? I keep thinking about Frank Spencer.. Ooh, Betty. The wind had us up at 4.30am and the cats hiding under the beds as the cat flap blew open and shut. I think they think it’s an invading Tom from up the road they battle who has now learned to make himself invisible.

Happily we suffered no real damage apart from some of the weed matting being lifted and one of the window lights smashed. The greenhouse has survived being in a sheltered spot and strengthened. The sheds are bolted into concrete so they won’t move.

Of course the real underlying problem behind all this is the warm temperatures. We’ve not even had a frost yet this year. The slugs and bugs think they’re in heaven, it’s warm and wet. So next season is going to be a nightmare.

Still, these are the challenges we face every year as gardeners. One way or another we muddle through.

Just one thing remains.. that’s to wish you a

Leave a Comment Here on What a month! Cancel reply