Well the weather has certainly changed although it’s been incredibly warm for the time of year. The rain has been more like a power shower, we’ve had 100mm of rain in just one day which is over a third of a normal November rainfall and we’ve strong winds gusting over 60 mph howling around and down the chimney. The greenhouse is sealed tight and hatches battened down which is about all I can do outside. 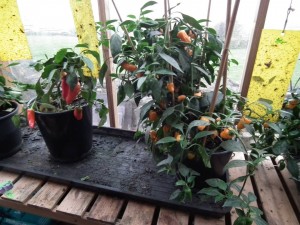 Chilli Peppers As Pretty As a Christmas Tree

The grass is still growing, which is due to the temperature being so high. Grass grows when the temperature is over 8 deg. C I thought I’d done the last mow of the year but it could do with another already. Not that I can mow when it’s soaking wet. Sometimes you just have to accept there is nothing to be done.

Over in the potting shed I’ve loads of chilli peppers. Problem with chilli peppers is that one plant is more than enough to keep us going for a year. Six is overkill, to say the least! When they’ve got fruit on they’re very attractive, like a Christmas tree with baubles hanging down but Val says we’re having a more traditional tree as usual.

In the greenhouse things are winding down fast. Because the vents are shut and there’s not much airflow mould is becoming a problem in the high humidity. I don’t dare leave the vents open in these winds. If the wind gets in to the greenhouse the chances are we’ll be looking at a new greenhouse next year.

About half the tomato plants have finished and most of the remaining ones only have a couple of green fruits hanging on. I think the best thing now is to clear those fruits and ripen off indoors as we need them. 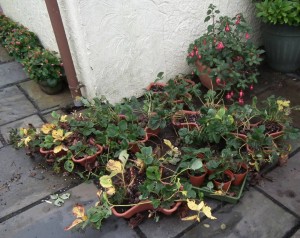 Ideally I’d give the greenhouse a good clean but not in this weather, thank you. Val wants to move some of her less hardy fuchsias and so on into the greenhouse for the winter, so the space will be useful. I’ve a feeling we’re going to see some cold weather next. No idea why, perhaps to balance this unseasonably warm if stormy period.

Outside the wind managed to blow my strawberry tower down. Not the big barrel, the set of interlocking pots. For now they can stay at ground level where, with a bit of luck, they won’t blow away.