My previous post on food waste and anaerobic digestion got me to thinking further ahead. By 2050 we’ll be at peak population and supplying the food for that population will require land.

But they’re not making any more land and what we do use is being exhausted by intensive farming globally. There will come a point where we will need to better use the marginal lands and uplands if we’re to eat. 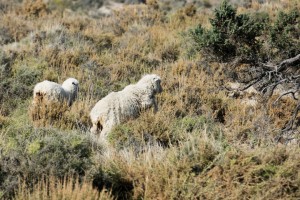 A better use of subsidy?

As I said about anaerobic digesters, to be economically viable they need subsidy or a massive increase in energy costs which is not politically acceptable. It does raise a point though, if the government can provide subsidies to green energy production then why not to green farming?

Half of the world’s topsoil has been lost over the last 60 years due to deforestation and erosion much of which is caused by intensive agriculture. Sustainable farming replenishes and creates topsoil. It’s a more expensive method of production but it isn’t using the planet’s capital – leaving our grandchildren to pay the debt.

Eventually we will need more land to grow on and the area that could provide it is the marginal land. Where we live now we have 3 acres of very poor pasture. The soil is compacted, thin, acid and nutrient poor. All it does is support some sheep.

If it was sub-soiled, harrowed, limed and fertilised before being re-seeded it could support at least twice the number of sheep it does now. The economics of rearing sheep, however, are such that it’s just not worth it. In fact, it’s hardly worth the cost of fencing let alone pasture improvement.

Add some shelter belts (we’re very wind blown) which would improve the micro-climate and other crops than grass and livestock could thrive. A long term program of green manuring and compost production would mean an increase in top soil depth which further improves potential productivity.

On the surface. economically this improvement makes no sense. It’s too much work up front for a possible gain 20 years in the future. Except that in 20 or 30 years the world’s population will be much higher, heading for a peak of 10.5 billion and we will need every inch of land we can get to grow on.

A lot of the costs of improving land as I suggest are in labour, so a serious program of sustainable land improvement would create a lot of jobs. They may not be high paying jobs when compared with working in the city but there are a lot of benefits to living in the countryside and doing something worthwhile you enjoy.

Halting or Reversing Population Drift from the Countryside

Reversing the population drift to the cities would mean more housing would be needed. Nobody wants to see the countryside covered in ‘little boxes made of ticky tacky’ as the song went but driving around we see lots of derelict houses caused by the amalgamation of farms and depopulation of the country for the towns where the jobs are.

We could easily add very low density housing – perhaps just one per hectare – without overwhelming or changing the nature of the countrside. We can build those houses to be appropriate to the landscape, comfortable and warm yet energy neutral and sustainable.

Here in wet Wales and western Scotland it’s perfectly possible to supply water by harvesting it from the roof and sewerage can go via septic tanks. A small woodburner, supplied with locally grown wood would serve to heat in the coldest weather. Built in low energy lighting and conscious rationing of power consumption coupled with local and on-site generation / storage would reduce demands on the electric grid or even put the properties totally off grid.

In other words, with a little thought and a change in attitude this development need not put a proportional burden on the infrastructure. Of course this influx of people will create more jobs in many areas. People still need shops even living on the land, they need doctors and schools which stops the closure of village practices and schools.

Bringing the Countryside Back to Life

Instead of the countryside being the preserve of large farmers and those retired from the city with their money made from property price inflation, it could become a growing community with a sound economic basis.

The Welsh government has made a small start on the road with its sustainable development, one planet policy but that insists on viable business plans. My contention is that improving the marginal low-quality land is not economically viable now but should be made so with subsidy, much of which would be returned to the economy anyway.

It’s an investment that needs to be made now if the land is to be ready when it’s needed. Projects like this take decades not months. Sadly I think the chances of it happening are small because human nature is such that we don’t worry too much about the future until it arrives. As the man who fell off the Empire State was heard to say as he passed the 30th floor – “So far so good”

There’s an interesting article on the current planning system on lowimpact.org’s web site here: Why does the planning system make it so difficult for people who want to live on the land sustainably?

2 comments on “Changing the Countryside”

Leave a Comment Here on Changing the Countryside Cancel reply