Well the weather certainly changed after the storm, by lunchtime on Thursday I was in a T shirt. I must say, this part of North Wales is one of the most beautiful places in the world on a sunny, summer’s day. The blue sea, rich green lowlands and the rugged hills covered with yellow gorse leading to the grey, majestic mountains.

It’s just a shame that we also have high rainfall and storms rolling in from the Atlantic. Then again, would we appreciate the glorious days so much with the inglorious? As someone was reputed to say with a sigh as he looked out of his bedroom window in California one morning. ‘Oh great, another perfect day. Whatever.’

I got another 5 of the leylandii windbreak planted, usual drill; lift the turf, use a crowbar to lever out rocks and dig a mere foot down. I never thought I’d miss a heavy clay soil! Just another 5 to plant and then, with luck, in a couple of years they’ll be providing some shelter from the wind.

The next job was grass cutting. There are times I wish I had a ride-on mower, certainly it would be faster but the exercise of walking behind my mower does me good. Suddenly, for no apparent reason, it started pouring out white oil-smoke from the exhaust.

Normally you can’t see the exhaust at all so it came as a shock. I thought it might be something serious but it stopped as suddenly as it had started. I think I’ll get the mower serviced at the end of the season, assuming it runs OK until then.

Friday started off overcast with the odd light shower. Mind you, I heard the south-east of England had some big thunderstorms so we didn’t do so badly. Around lunchtime it started to cheer up and by 3pm it was absolutely lovely again, if a little chilly in the breeze.

The grass is a bit damp for mowing and I didn’t fancy doing anything too strenuous as my sciatica is playing up. If you’ve not had it, be grateful It’s very odd, a slight backache but shooting pains in the heel. Something to do with trapped nerves.

I noticed some whitefly on the peppers in the solar shed so sprayed them with an organic spray. The time to tackle pests is the moment you see them. Left alone for just a week and they’ll be a plague. I think they double their numbers every day or two. 100, 200, 400, 800 – it’s incredible how these things multiply. 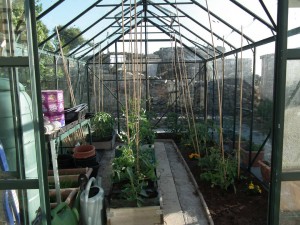 Easy to neglect but you should remove sideshoots from your tomatoes at least every week. Best practice is to keep an eye out for them every time you go in the greenhouse.

Got them all done and tied to the stakes before giving everything a good watering. Since the weather is finally behaving like summer, watering is critical to a good crop. The tomatoes, particularly the Sungold are really zooming up.

It wasn’t bad on Saturday but quite a chill in the wind so took it easy, returning to the battle on Sunday. More aggravation with the mower, it’s usually so easy to start but now it’s just not coughing. Leave for half an hour and away it goes until it decides not to start again. The only reliable petrol engined machine here is my 1976 Merry Tiller. It might be noisy and inefficient but at least it never lets me down no matter how abused. 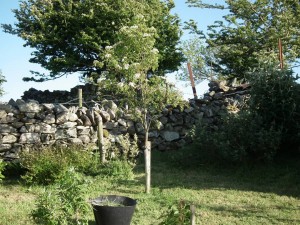 In my May newsletter I quoted the old saying ‘Cast not a clout till May be out’ and had a few readers email to say the saying meant the May flower (Hawthorn blossom) rather than the month.

Well the flowers are finally out so I’ll be casting clouts.. just as soon as I can find some on Ebay. 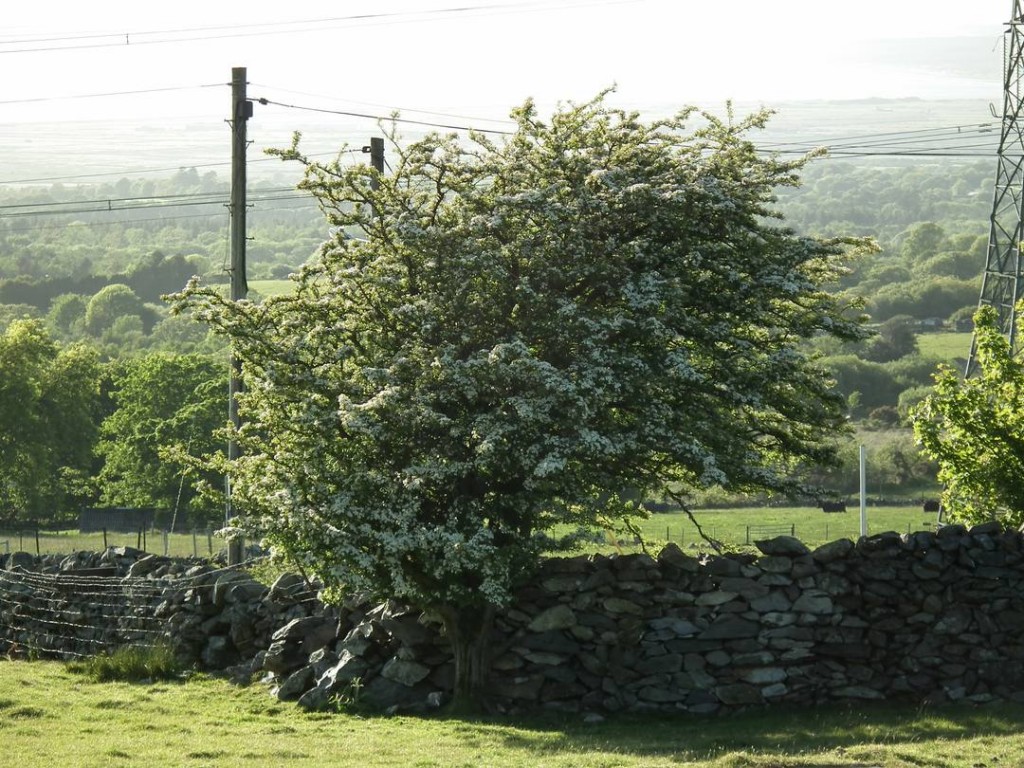 Mayflowers out! (Hawthorn in blossom)