The last few days have involved a lot of running about to accomplish little – bit like most of the politicians who’ve been trying to convince us they’re the one to vote for. 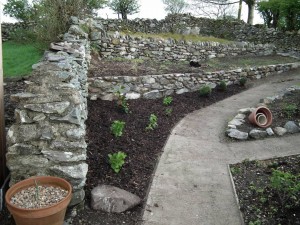 We’ve got some things done though. I say we because I was drafted in to help plant up Val’s decorative border by the new terraces. Digging holes to plant in here is a long job. So many blessed stones to dig up.

I’ve got a new tool to help with getting stones out, a 5 foot iron bar with a point at one end and a small blade at the other. Plenty of leverage to lift the bigger rocks out. 20 pounds from the builder’s merchants.

Having got them planted, we spread a bark mulch to suppress weeds around. The plants look at bit lost and lonely at the moment but once they get growing, it will fill up. Val may well pop some annuals in to fill the gaps this year.

We made a few garden centre visits and I bought some tomato plants, peppers, cucumbers and aubergine. In past years garden centres have offered a very basic range of tomatoes. Gardener’s Delight, Shirley and a tumbler. 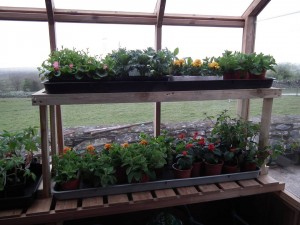 This year someone has woken up and is offering some fantastic tomato varieties including heritage types. Black Russian, Chocolate Cherry, Green Zebra, Tigerella, Ailsa Craig and Sungold. I may get a few more plants yet as the plan this year is to use the greenhouse just for tomatoes and cucumbers, a few salad crops. Because of the change of use, I’ve moved some of the greenhouse benching into the potting shed.

The new potting shed will accommodate the peppers and aubergines but right now I’m battling Val for space. Cursed flowery things!You can get the potting shed with a window shelf built in but I want the vertical space to handle tall peppers so didn’t order that. Instead I’ve built up a second tier shelf from some 2×1 to hold a gravel tray. This can be removed when no longer required. 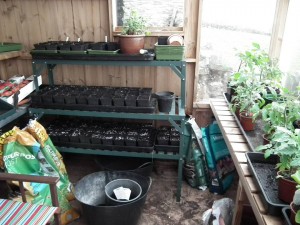 2×1 is useful for so many things that I keep a stock in. By ordering it as roofing battens from the builder’s merchant it’s tanalised and cheap. It might not be elegant – but so what?

I never seem to have any luck with autumn-sown broad beans. I suspect the wet climate here doesn’t help but I tried again last year. Not a shoot – literally zero result. So I’ve made a late sowing of Witkiem and Karmazyn in pots in the shed. Karmazyn are a pink seeded variety that I’ve not grown before. I hope they taste as nice as epicure.

Still got loads to do to catch up with being away in April. The next job is to get the greenhouse ready for planting out.