Creating a shelter belt, a windbreak of trees is a long term project but once achieved, it’s there permanently.

Where we live, 200 metres up a windswept hillside with a thin and stony soil is challenging for a grower. It’s also one of the wettest areas of the UK along with parts of western Scotland which can get depressing but at least we don’t worry about drought.

In the past, small farms and smallholdings in locations similar to ours have supported families on varied agriculture. They’ve raised vegetables, grains and livestock even though the land was marginal. The economics changed and away they went.

Prior to that vast areas that are now just grass were forested. The clearance of these started with agriculture, most likely slash and burn, but the pace quickened as Britain built her fleets of wooden ships to rule the seas. 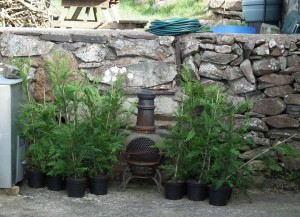 Now the economics are such that all the land is considered good for is growing grass to feed sheep. And when you look at the poor returns farmers make from upland sheep, you wonder why they bother.

It’s so simple to understand the effect of wind – just lick the back of your hand. It might feel a little cool. Now blow on it. Freezing isn’t it?

Trees and hedging grow slowly here with the wind and often they fail completely. Yet if provided with shelter they will grow just as well as trees in the lowland areas. So my plan is to start with fast growing, tough trees and once they’re established then to plant a more diverse range of hedging and deciduous trees in their shelter. 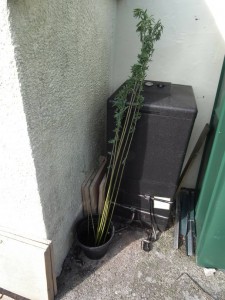 WIllow Cuttings in Water in front of Compost Bin

I’ve taken delivery of 20 Leylandii in pots which will go in a row to the south side of the field I’m improving. The ‘neighbours from Hell’ tree isn’t my favourite but eventually they’ll be recycling through the woodburner.
I could easily run another 60 but even at the bargain price of £5.00 each delivered, that’s too much for my piggy bank.

The other tree I’m going to try out is willow. We’ve about 10 goat willows around the place which are doing well but buying them in as 4 foot trees is dear. My son-in-law kindly brought me some fast-growing willow cuttings.

I’ve cut these into one foot lengths and stuck them into a trough filled with a mix of spent compost, soil and perlite. If they root, as I expect, then I’ll transplant them onto the east side of the field in a row. 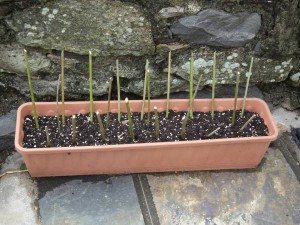 Before they go in I need to clear strips in the grass so they’ve no competition until they’re well established. I’ll mow as low as I dare, in case I hit a rock and damage the mower, then a spray to kill off the grass. Once the grass has died I’ll lay weed-suppressant matting and plant through that. Experience has shown me that clearing without some sort of mulch is pointless as the grass comes back in just a few months.

It’s a sobering thought when undertaking a long term project like this that when it matures I may well be in the great garden in the sky. The planet will be here though long after we’ve all gone, and hopefully a little better than when we arrived.