Wednesday was one of those wonderful days that don’t happen enough; sun shining, blue skies spotted with white clouds and not enough wind to notice. Crisp, clean and cold. Not a day to waste indoors although some work had to be done before I could get out – such is life. 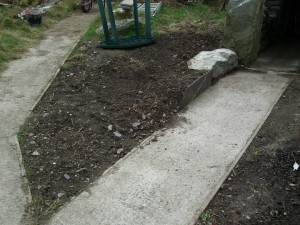 Retaining the soil to the side of the path

The first job was move a large rock that I’ve uncovered in the new vegetable plot. Having dug around it and down it’s apparent it’s one of those tip of the iceberg rocks and it’s here to stay. Oh well, a raised bed over it is the only way to make use of that space.

Another large stone was moved into place to hold back the sloping soil that was slipping onto the path. The way I’m going I’ll be building a new Stonehenge! I’ve a lot of land but precious little level land, nearly everything here is sloping which I suppose is logical as we’re on a hillside. 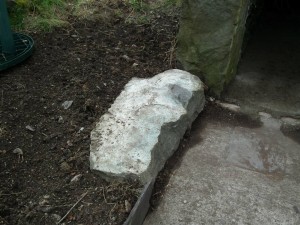 I told you it was a large stone!

Of course you can grow on a slope and there’s an argument that growing on a south facing slope is the best way to get maximum light on the plants but you have to be careful about soil erosion especially in an area of high rainfall.

By terracing I’m avoiding the erosion problem and it’s pretty difficult working on a steep slope to say the least. It’s a lot of work initially but once done it doesn’t need doing again.

After moving the stone something lighter was called for so I drilled a few holes in the walls to hang some planters on. With the winds here we can’t have any hanging baskets but fixed planters and heavy pots are OK. Val likes to brighten up the house with flowers which I kid are just compost material.

Then I had to plane the door edge to the ty bach (small house) as the locals call the outside toilet. It’s fine in a hot summer but swollen the rest of the year which makes opening and shutting a difficult task.

I really don’t know what happened to the day, I’d planned on planting some gooseberry bushes and a pear tree we’ve got in a pot but time was called by the sun starting down and the temperature falling.

Leave a Comment Here on Terracing a plot Cancel reply