It’s been a busy old day here. The doorbell went first thing and it was our Christmas turkey, courtesy of Grannie Annie. We don’t like to think too much about where the meat on our plate comes from. Half the population think it magically arrives ready shrink wrapped onto the supermarket shelf and pay no thought to the animal that has gone so that we can eat.

Well, having read how they’ve been reared, we can enjoy Christmas lunch knowing they had a decent life and buying from Ann or other producers like her keeps the real countryside going rather than the whole thing becoming a mass of concrete sheds and huge agribusiness machines thundering across the land.

Being an absolute love, she also popped a chicken in for us. That went down well but we had a fight on our hands to eat it, the cats were determined it was theirs. Our darling daughter volunteers for Cats Protection and somehow we acquired another two youngsters last week. Rowan has had a sad time. She was allowed to get pregnant and dumped. Despite having to cope with feeding herself and living off the land she managed to bring one kitten up. As if that wasn’t enough, some swine shot her in the neck with an air rifle.

After all this, she’s still a lovely trusting cat who purrs if you just look at her. Having said that, she’s a bit cheeky. We now keep the milk jug in the fridge since she was helping herself and, much as I love my cats, I draw the line at sharing the same bowl!

The other new member of the family is Pixie. She’s older than she looks, being tiny albeit with big ears. She’s decided Rowan is her mum, and Rowan has decided she must be and looks after her. Dexter, our young tom, is really happy to have some pals his own age around. Aphy at 15 isn’t the liveliest of cats although she still has her moments and sometimes a 5 minute mad spell like any kitten.

Mr Squeak has been a bit shocked by all these youngsters. He’s about my age (9 cat years is about 50 human) and temperament, so spends his time in the garden grumbling at the younger generation. Still, he’ll get over it. When the turkey arrived I put the box down in the kitchen and the entire pack surrounded it. With their incredible sense of smell, they knew there was something special in there.

I had a phone call from my publisher yesterday warning me the book was going to be out of stock for a week or two. One of the big chains had placed a large order and they’d ordered a reprint but it was going to be delayed. I quickly ordered some more for myself and they arrived next. It’s like Clapham Junction here! And not even 10 o’clock.

Val picked up some reduced whipping cream from Morrisons so we thought we’d have another go at making a video of her making butter. It seems we’re cursed, this time the batteries died and the spare set weren’t charged. Next time.

I did turn about half the carrots I came home with yesterday into carrot and parsnip mash. The carrots taste fine, even if there’s a bit of damage to cut off. The parsnips, well maybe not show bench quality but Val was impressed when one wouldn’t fit into the washing up bowl!

So to tea (or dinner if tha’s a posh southerner). Chicken, pyramid cabbage, stuffing with onion, Valor roasted potatoes and carrot and parsnip mash. Life’s great! If the turkey tastes half as good as the chicken, it’s going to be a great Christmas dinner. 9 good portions of the mash went into the freezer.

By popular demand.. and because I’m crackers – our family of cats.

First up is Rowan, she’s in the front window with the Christmas cacti that she likes removing the flowers from. As you can see on her side, she’s been spayed. 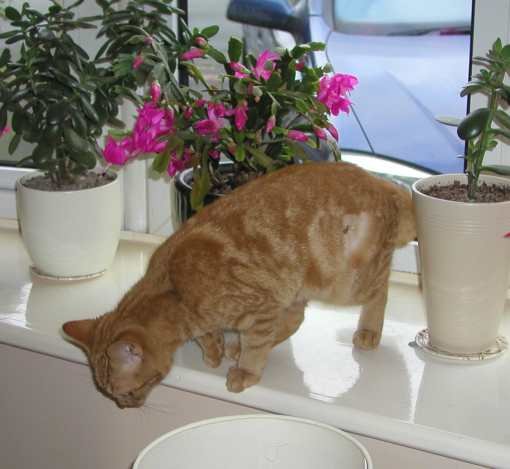 Next is Pixie on the hearth investigating Val’s collection of wooden cats. You’ll notice the fireguard, which we decided to get after Dexter nearly set his tail on fire. Expensive creatures! The tatty tennis ball is Dexter’s toy. He captured it from somewhere and trotted in with it proudly in his mouth! 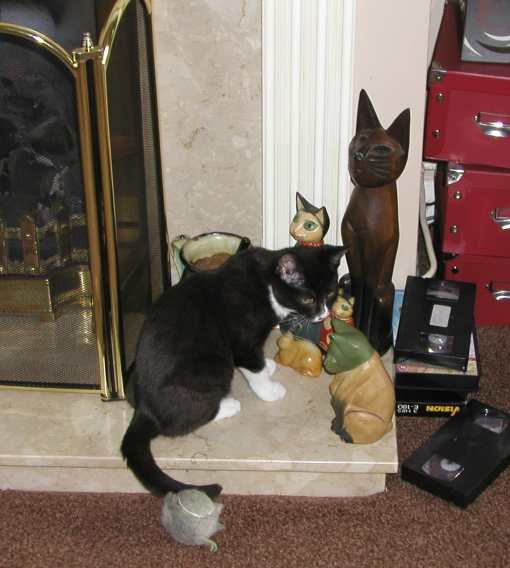 Finally, if I seem tired at times, this is why. Dexter at the front, Aphy to the right and Mr Squeak with his back to camera. I need a bigger bed. 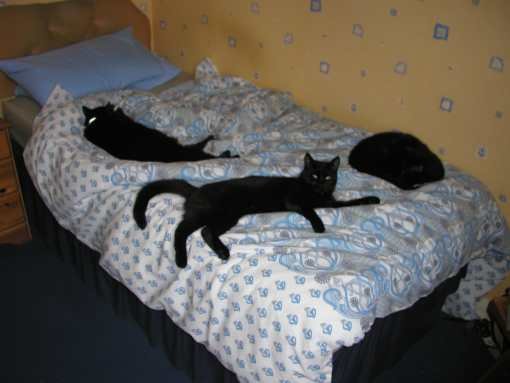 5 comments on “Christmas is Coming!”

Leave a Comment Here on Christmas is Coming! Cancel reply