Back on the Plot!

Well I’ve finally got back onto the plot. The last weeks have been a bit of a nightmare. I’ve been writing my new book, The Essential Allotment Guide. Sometimes the words just fall onto the page and other times it’s like drawing teeth.

At one point I must admit I was ready to give up. I just couldn’t get things right. So, I took a day off to write an article on something completely different and the next day got back onto the job with a fresh eye. Last night I emailed the completed book to the editor and breathed a sigh of relief.

There’s still some work to do on the book, sorting illustrations for a start and once the editor gets back to me alterations, polishing and re-writes I’m sure, but it will be on the shelves in March next year.

Down to the plot in the afternoon, where it was pretty bitter. In the shaded parts of the plots there was ice on the surface of puddles but it wasn’t too bad in the weak sunshine. It was so wonderful to get some fresh air and focus my eyes further than the computer screen.

It all happens when I’m not there. The skip has come and gone, so I missed the opportunity to get rid of two sacks of blighted potatoes. Not quite sure how to handle them apart from putting them into the waste system. We’ve had some chippings delivered and it looks like three loads of leaves, which will be useful, as well.

There’s a lot to do if I’m to be ready for spring and the sooner I get on with it the better. When I passed Jim’s plot I felt positively jealous of him. All dug over except for his leeks and sprouts, clean and nothing much to do until spring arrives.

My first job was to water the strawberry barrel. Unlike beds where there is water in the soil, no matter how much it rains the barrel needs watering. It wasn’t bone dry but nearly so gave it about 20 litres.

My Brussels sprouts are looking well, think some picking is called for on my next trip but today I wanted to get the carrots up from the raised bed at the bottom of plot 5. They really should have come up a month ago so I was expecting a lot of slug damage and I wasn’t disappointed

Often you can get away with sowing things late but harvesting late is far more risky. There’s your crop at the peak of perfection and every bug from miles around heads for the fine feast. Still, nobody to blame but myself. It’s one of the problems we have when growing, sometimes life gets in the way and we don’t have the time. It’s all right to preach what to do when, but actually getting the time ain’t so easy. You wouldn’t believe I used to teach a time management course to managers years ago.

I’d sowed three types of carrot in the raised bed, Healthmaster that I’d been really impressed with the year before, Touchon that is a French variety and Senior a maincrop that I’d found half a packet of from a couple of years ago. I don’t think you can get it anymore. As I recall it hadn’t done too well for me.

The Healthmaster were a disappointment. They’d not grown too well and many of them were dumpy, twisted, forked candidates for the silliest carrot show. The Touchon were OK but the Senior had produced some really good specimens. One was nearly a foot long and good girth too. It’s never all bad news.

I can only think there was something in the compost to affect the Healthmaster, in fact it did seem patchy when I was harvesting but there’s no manure in there. Perhaps some of that dreaded aminopyralid had got in to the municipal compost.

Next job was to dig up some parsnips. They’re better after a frost has been on them and we’ve had a few of those. I love parsnips roasted and mixed with carrots as a mash, so I was hopeful. The tops looked well, which was a good sign but until they come up you never know

The man from Del Monte says Yes! Some of the parsnips are absolutely brilliant. Not quite so big I had to ask for help to carry them but I think the best I’ve ever grown. You’ve got to win at times. Tomorrow I’ll make a batch of carrot & parsnip mash to freeze.

Picture below is the brussels sprouts under netting, bit difficult to see but they’re looking quite good. 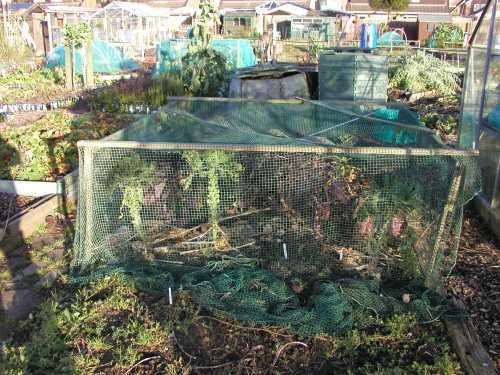 Leave a Comment Here on Back on the Plot! Cancel reply