It’s cold. I mean it’s freezing out there. I’m really happy about that, as well. The reason? Well the last couple of years we’ve had really mild winters, warm and wet followed by warmish but wet summers. So if we have a really cold winter, with a bit of luck we’ll have a good summer next year. That’s my theory, and I know it’s completely unscientific but I can hope.

The other good thing about a cold hard winter is that it kills off a lot of the pests that otherwise are waiting in the spring to devastate our crops. Our ecology in the UK has evolved to fit with seasons and when those seasons don’t happen we get problems.

Slugs and snails are the obvious ones. The last couple of years we’ve had more slug problem than I can ever remember. Even made the national news a couple of times. Last year was the year of the butterfly. As I squashed the eggs on one cabbage, a butterfly was laying more on the next.

So, I’m hoping for a really cold winter. I nearly forgot, there’s something really nice about doing some digging over on a cold crisp day. I’ll share my secret – thermal underwear! If you’re posh you can buy ski wear or if you’re like me, get the same stuff in Asda or Matalan for a few quid. The Norwegians have a saying that’s something like “There’s no bad weather, just being improperly dressed”

Sunday was, as predicted, the great bean podding. We got another 9 packs of borlotti beans and about the same in beans from the runners. I know you can dry beans and store them in airtight jars but there is always the risk of mould developing and ruining the jar if they’re not thoroughly dry. Because of this we just split them into portion sized packs and drop them into the freezer, pulling out a bag as required. They’re quite beautiful in their own right.

Having heard the weather forecast and expecting this cold spell, Val spent most of Monday afternoon in the garden, filling the sacks with compost material for me. She calls them flowers, but I call them compost material. Don’t worry, just a family joke. I do love the garden that she’s created.

It probably wouldn’t win any design prizes, for a start we’ve no blue painted fences and decking, but it suits us to a tee.

Anyway, my job was to move the heavy pots from the top end of the garden down to the warmer end by the house on the patio. Then I took the bags of green waste round to allotment for the compost heap. Strangely, considering it was cold and drizzling, there was nobody on the site, but me!

I pulled up the rest of my cauliflowers. One had formed curds, about the size of a tennis ball, but nothing on the other plants. I can’t say I’m surprised, the caterpillars had a real go at them and when I pulled them up, they had clubroot. So from now on it’s following the clubroot growing instructions for me, which is a shame.

I don’t know how it got into that bed, I suspect in bought in compost but who knows? I did have a chat with John Carver from the National Vegetable Society who told me an interesting tale. He has clubroot in his garden and had taken his infected roots to his local tip. As with all the tips in our area nowadays, things are split into sections for recycling etc which is very laudable.

Anyways, they demanded these roots were put into the green waste and despite his protestations and explanations that they were infected, insisted. Now the councils organise the green waste for conversion into compost. Some is sold directly and some is sold on to the manufacturers of those bags of multi-purpose compost in the garden centre. Makes you think.

I’ll be keeping my head down for a couple of weeks now, finishing the new book. It’s starting to look something like now, thank goodness. Did have a funny, my pal Richard “Down the Lane” Cannon sent me an email with a photo. He’s in Southampton for a week and went into Waterstones for a mooch. His comment was 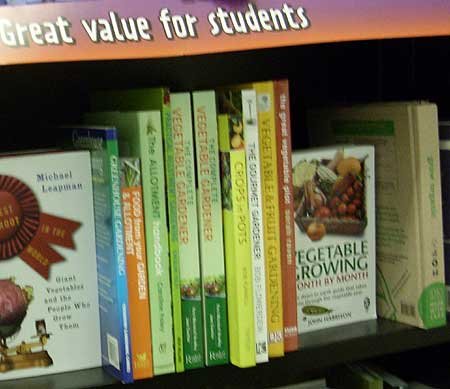