Visitor from Down the Lane

On Tuesday, our good friend Richard Cannon of “Down the Lane” fame came up for a couple of days. We met through a forum ages ago and we’ve spoken many times on the phone but this was the first time we’d met in the flesh.

Hardly had he got over travelling up from Ashford, we dragged him out to the National Vegetable Society meeting in Crewe. The speaker was Graham Wagstaffe and his talk was on container growing with a slideshow.

I must admit to being a little sceptical about some of the results from very small containers but the proof was in the photographs. He certainly gets good results.

One interesting tip – if you’re sowing French beans into compost, mix a little soil that has had beans growing in it before in. He reckoned it doubled the germination rate.

I had a bit of a business problem arise on the Tuesday night, someone attempted to fraudulently claim a large refund out of my PayPal account so I’m afraid Wednesday wasn’t as productive as it could be. I didn’t sleep on the Tuesday night so was washed out on the Wednesday. I’m happy to say it has now been sorted out but it was frustrating. Luckily for me, the person involved isn’t really as clever as he thinks. In fact, I’ve seen retarded slugs with more sense. Hope he reads this!

Still, Richard persevered in showing me how to use some video editing software and we tried to make a video of Val making butter. She’d chanced upon some double cream reduced in the Co-Op and cleared the shelf.

Unfortunately, I’m not too good with the camera either and the light levels weren’t brilliant. I might publish it (the video) if I can correct it sufficiently. Either way, we’re eating lovely butter again! I think it took her about 20 minutes all told, so not a huge task. We do have an article with full instructions on it here: How to make Butter

Oh, while I think about it don’t try those daft recipes for making butter where you shake a jar for 3 hours. An electric whisk is the way to go.

Then I was telephoned by the Financial Times, no less. No, not an in depth interview to gather my views on the best way to resolve the international financial crisis or how I was safeguarding my £11.76p savings in the bank. They wanted to know if there were more people growing vegetables because of the credit crisis. I resisted pointing out that rushing out in October to plant veggies is not going to make a huge difference if your house is at risk.

However, if you are starting this veg growing lark specifically to save money, pop a comment on here. I’d like to know how much of a factor money saving is to people who grow their own.

On another note, the new kitten is settling in well. He now runs in and out of the catflap and steals food from under Mr Squeak’s nose. Squeak is not too happy. Unfortunately, Claudipus is not looking well at all. I’m afraid we’re talking a few days before it will be time to call the vet out for the last time. Considering the vet gave him 2 weeks nearly 6 months ago, he’s not done badly but we’re dreading it.

Photo below: Richard Cannon (Tall & Handsome) on the right of shot. Myself (Short & Nearly as Handsome) on left of shot. Richard wanted a photo for his web site. 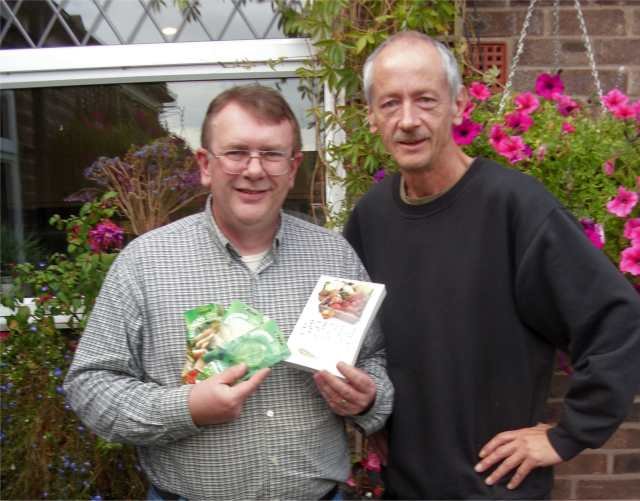 9 comments on “Visitor from Down the Lane”