It’s been a bit mad for the last week. For a start I’m getting towards the deadline on my new book and things aren’t going to well. Some parts have just fallen onto the paper, but others are on the third re-write. It’s quite ironic, I haven’t had much time for the plot because I’ve been writing about it!

Then it was a run into town for yet more envelopes and back home to put the free seed offer online. Incidentally, all those who ordered whilst I was out of stock got the free seeds as well. I’d be a bit cross if I ordered today and tomorrow there was a smashing deal on so it seemed only fair.

The response was a bit of a surprise, orders just poured in so Saturday morning was spent frantically packing to catch the 12:30 post. Luckily the box is just across the road. 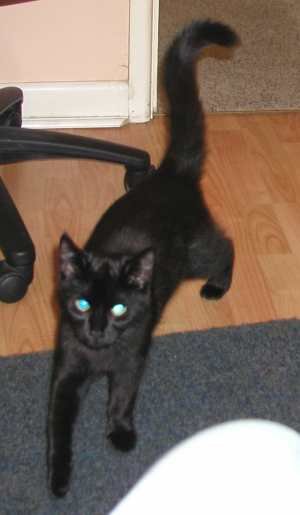 In the afternoon my daughter arrived bearing a gift. Well a kitten actually called Dexter. He’s 5 or 6 months old, jet black with a Siamese look about his face and an incredibly long tail that moves around the room at lightning speed. He was a bit nervous to start with, hiding away as they do but after an hour he was sniffing his new home.

What was funny was he sniffed our elderly Claudipus who was fast asleep and woke him up. Claudipus sat up, looked at him then meowed at me to feed him as if this new chap had always been here.

Unfortunately, Mr Squeak, who was the youngster at 9 years old, has not taken it so well. He’s quite terrified of the kitten and gets really cross with me when he sees him. Applied some Savlon to the scratches he inflicted on me as punishment for bringing this monster in

Dexter decided my bed was fine at about 4am on Sunday morning. He actually got under the covers and proceeded to give me a course of acupuncture. Kittens have incredibly sharp claws. They are also a nightmare to photograph, staying in a cute pose until a split second before the flash goes off – sorry that’s the best shot so far.

Sunday was yet another hectic day, my daughter had spent the night baby-sitting for my sister-in-laws three children and her car was broken into overnight. Unlike Cheshire police who just give us a number for the insurance when our car was broken into, Staffordshire police sent out a fingerprint chap and are making enquiries. £1000 damage to the car, £150 excess and loss of no-claim bonus for the daughter all so some scallywag could get a satnav from the glovebox to sell down the pub for £40.00

Bring back branding thieves on the forehead!

So I did get down to the plot for a bit Sunday and then the daughter arrived so back home to commiserate and console.

Today was a little better, I headed off just before 5pm with a large bag of garden waste and the kitchen bin for the compost heap. Gave the bin a watering and a stir, as it was looking a bit dry, followed by some urea to keep things rotting down.

Over to the main greenhouse where half a bag of mixed tomatoes were ready. The Green Zebra have finished, as has the Gardener’s Delight so down to few Jaune Flamme, a Sungold and a Yellow Pear.

Few more chilli peppers and I think we may yet have a couple more cucumbers. A good watering in both houses and the strawberry barrel and it was already past 6pm.

Started tidying up on the brassicas bed on plot 29. Out with the calabrese, that really has been a dead loss for me. Next year I’ll go back to Chevalier, which has always been a great performer for me. It’s funny how I can grow one variety well yet someone else will tell you ‘that’s rubbish’. That’s the beauty of growing your own I think. You find what works for you.

There’s a lot to do still on the plot, the great winter tidy-up and dig. Compost bins to empty and turn but nothing too urgent, thank goodness. My pal, Richard ‘downthelane.net’ Cannon is coming up for a few days tomorrow, Virgin Rail permitting so we’re looking forward to swapping some skills. He’s going to show me how to make videos and I’m going to show him some web design tricks, although his present site is really good. Think I’ll be winning on this deal!

Tomorrow is the NVS meeting at the Hop Pole in Crewe – 7:30pm. We’ve got a great speaker and it should be a good evening. All welcome, members or not.