It’s not been the best of weekends, for a start our new cat’s arrival is delayed. He’s been vaccinated, wormed, de-fleaed and had his bits chopped but a tummy bug is doing the rounds at my daughter’s and he’s got it. It’s not serious, but we don’t want to introduce an illness to our cats. For a start, even Squeak, the youngster, is 9 years old. He is a middle-aged moggy; the other two at 17 and 15 are pretty elderly.

Despite our protests that we didn’t want a kitten, although we were thinking about taking on a 5 year old or older when Claude departs this world, we’re really quite disappointed. Oh well, couple of weeks and he’ll be with us.

Down to the plot on Saturday, where I found I now have the dreaded clubroot. This is not the end of the world but it is a serious disease that will affect the way I grow brassicas from now on. There’s an article about it on the site – Coping with Clubroot.

It was one of the cauliflowers in the raised bed that I pulled as the caterpillars had eaten the leaves. Now the question is how the disease got there. I raise from seed, so it’s not been introduced on a bought in or swapped plant.

My main suspect was the municipal compost. It’s made from council collected green waste. If there were infected brassicas put into that waste then possibly that’s where it came from. I know the waste is thoroughly composted, but there’s always an element of bad luck in these things. So it’s possible.

The cauliflowers had been transplanted from 3″ square pots into the bed and it appears the roots have hardly spread from that size. Now this makes me wonder about another possibility, the bought in multi-purpose compost. As I understand it, this is essentially a mix of finely riddled municipal type compost, peat and added fertiliser. Yet not all the plants are affected so maybe it’s not the compost at all.

There’s no way to know for sure, I just have to work with a problem that I cannot cure. Bit like the weather really.

Cleared the half barrels of the last of the early carrots. The maincrop carrots are in a raised bed. I’ve just been pulling from the barrels as we need, leaving the rest to grow on. I suppose these are the runts of the litter! Anyway, I’ll cook these and make carrot mash, which I love, for the freezer. It’s basically the same as carrot & parsnip mash, but without the parsnips.

Now I’ve been going on about the Sarpo potato varieties since they became available. They’re blight resistant and they don’t seem to suffer too much from slugs. The Sarpo Mira are a very dense potato and it seems the slugs can’t get too far with them.

This has been a blight year, again. Not as bad as 2007 but still pretty bad. This year though, the Sarpo seemed to be more affected by the blight than last year. I’d got pretty complacent about them, having seen the Sarpo unaffected when every other potato on the whole site had gone down. I’d cut the haulm off the potatoes but not urgently and it’s come back to bite me this year.

I’d say a good quarter of the potato tubers have blight. Some were just mush, a very stinky mush at that, and some you could see the blight starting. It’s pointless saving those as, once into the tuber, blight will spread and to other tubers in the sack.

Nearly as bad, there’s far more slug damage than usual. Now I had used slug pellets a couple of times with the other potatoes, the ferramol based ones, which are safe for wildlife – Safe Slug Pellets – but the foliage on the Sarpo is so dense you can’t get any to the ground once they’re established.

This year I had used saved tubers from last year as seed potatoes for the Sarpo. I can’t help but wonder if that had something to do with the poor results, although the seed potatoes were good quality as far as I knew. I do hope it’s not a new, more virulent strain of blight striking. Anyway, fresh seed potatoes for next year.

It had been lovely and warm in the afternoon, but as the sun started to sink it cooled quickly. Having spread the potatoes on the ground to just harden the skins off and dry them, since no rain is predicted until Monday, decided to leave them overnight. Got up on Sunday to discover it had rained. Typical!!

Gaynor (Larry’s wife) had popped round on Saturday with 3lbs of raspberries, so Val was making jam. The sun did come out and I headed back down to the plot after Gardener’s Question Time on Radio 4. Just loved hearing the RHS claiming all the credit for discovering and publicising the aminopyralid in manure problem. Funny, I didn’t hear a peep out of them when people were wondering what the heck was happening. Perhaps I’m being uncharitable.

Finished getting the Sarpo potatoes up on plot 5. It’s strange, the last row had little slug damage and some plants had no blight at all, yet other plants had loads. Oh well, that’s gardening. At least we should have enough potatoes, despite the losses, to get us through to next year’s early crop. When you consider the effort that goes in to growing something like a potato, especially growing organically, you have to have a lot of respect for the farmers in this country.

Val came down later and harvested a load more borlotti beans and half a carrier bag full of tomatoes. I’d taken the car round and by half six had the boot full of potatoes and headed home to make my carrot mash, which went very well with dinner.

Photo Below: The roots of a cauliflower affected by clubroot. 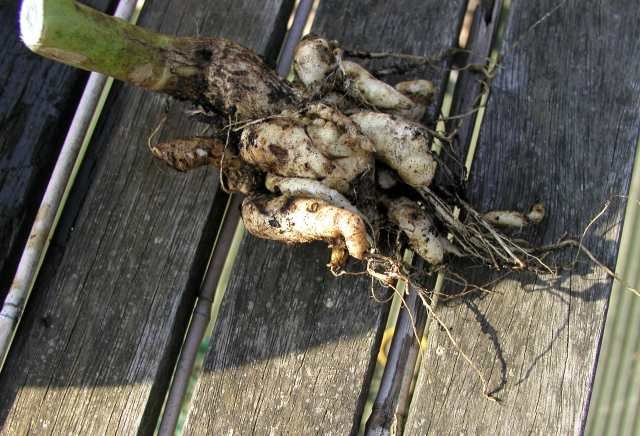