We dropped down to the plot for a few carrots, leeks and borlotti beans to go into a stew so I thought I’d photograph the construction on the onion bed. (see this months photographs) I’d spent most of the day at the computer and there comes a point where you just need to focus your eyes on something further away than a screen and breathe some fresh air, so I didn’t take much persuading when Val suggested a walk around to the allotment.

This year has been my best ever for borlotti beans. Unlike runners or French beans you really need a long season for these and I got them started and in the ground early this year. Luckily there were no late frosts, which is unusual as often we get one to kill my beans at the end of May.

We didn’t spend too long but we filled a carrier bag with beans without really trying. There’s loads more left on the plant, which we’ll probably get at the weekend. They can be dried but it’s a bit of a fuss and we’re both really busy, so we’ll just freeze them.

If you’ve not grown borlotti beans, do give them a try next year. They’re really substantial and add body to stew or a soup.

Talking of freezing and freezers, I’ve been carrying out some research on power consumption and costs. As I’ve mentioned, we have 3 freezers and a fridge freezer, so I wanted to see how much they are costing. Well we did have a panic. The first freezer to get put under the spotlight is the small chest freezer. It’s quite new, although we bought it second-hand, so I expected it to be efficient.

The meter tells me all sorts of things I don’t want to know, like the voltage and frequency of the power supply but after only half an hour I had puzzled out how to put the cost of our electricity into it. So, when we examined it today it told me I had used £2.74 worth of electricity.

This equated, roughly, to £300 a year to run the freezer. After some discussion, we decided the meter must be wrong – that’s over half our total annual electricity bill. Back to the instruction manual, which is as clear as mud. Much button pressing later (it’s actually simple when you figure it) I discovered it was actually costing about £33 a year to run the freezer, 2.74Kwh over 84 hours.

I’m now comparing the other freezers and soon we will know what it costs us to keep frozen food in total.

Picture Below: Val harvesting borlotti beans. Notice the magnificent globe artichokes in front of the beans. 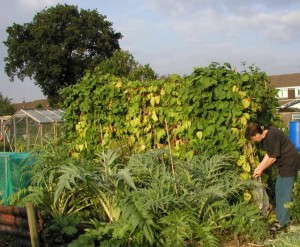