Another sunny afternoon, where were these days in August when we needed them? So off to the plot to plant my autumn onion sets. Val was making some more apple and cucumber chutney and her last instruction as I left was not to bring home any more cucumbers. So I only picked two. Oops!

I also took half a carrier bag of tomatoes off the plants in the main greenhouse, mainly the yellow pear, which are really nice. I’m afraid a few were diverted straight into me and never made it to the bag. Next I fed the plants in the greenhouse. Since they’re still producing, I think a bit of help can’t hurt.

That done it was time to check around the plots a bit. Now the caterpillars have devastated my cauliflowers but today I had the grand harvest of three small ones. When I say small, I’m not joking. The plant reacts to the lack of leaves by producing what flower it can and so some small cauliflowers. The three together will provide one meal. Great! 8 plants for one meal. Oh well, at least I have some fat caterpillars happily pupating somewhere.

So to the job in hand, planting those onion sets. I’d picked up 50 Senshyu Yellow Japanese onions and 50 Electric, a red onion. Now I’d had an email asking how deep to plant onion sets, generally I try to discourage becoming a helpline as I already get upwards of 30 emails a day – not counting the spam. Anyway, this email got me thinking, when you are absolutely new to this game things aren’t always as simple as they seem when you’ve been growing for years.

For starters, which way up do they go or is it sideways? Well the rule is the little set has a growing point at the top and tiny roots at the base so it’s root side down. You actually want them so the tip is just at soil level. Having recently tilled the soil so it is light and fluffy they go into the soil easily but if the soil was firmer, pushing could damage them so best to make a little hole. I firm the soil with my fingers as they have a habit of pushing their way out.

Now with sets, the smaller ones are actually less likely to bolt. So don’t throw away the runts. With onions the more room they have to grow the larger the onion is likely to be, all things being equal. Usually the spacing is between four and six inches apart each way, I opted for six inches.

The 100 sets planted, this left me a bit of room at the end of the bed so I sowed a couple of rows of some onion seeds we bought in France, they’re described as ‘Red Onions of Florence’ variety Simiane.

Now I’m not sure, but I think they might be a shallot rather than an onion but my friend Annie from the Limousin said you could use them as spring onions and they were very hardy. The winter temperatures in the Limousin are lower than we get so they should be OK. The packet reckons you can sow between September and December, harvesting in May to June.

Now there is one final danger to the onion sets, those blasted pigeons just like pulling them up when they start to sprout. They don’t eat them but just play at being vandals, scattering the sets around. So you can net but I decided to use some fleece supported on some old chair bases and bamboo canes to make a sort of tent over them. A bit Heath-Robinson but it will do the protection job and the slightly milder conditions under the fleece should get them off to a good start as well.

The small bed by the main path also got three rows of the French onions. Now with these I just draw a drill, a fancy way of saying ‘scrape a shallow trench’ – about half an inch deep and water into the drill. Then scatter the seeds in thinly. Ideally one seed every half inch or sow but it’s never that exact. Not all will germinate and eventually they will be thinned to one every 10cm which is foreign for 4 inches.

After sowing I gently move the soil over and then put the rose on the watering can and give them a water from the top to settle everything down. I was, of course, using my French 11 litre watering can.

Now all I can do is keep my fingers crossed and the weeds down. With a bit of luck, we’ll have some early onions next year that will be better than this year’s efforts.

I’ve scanned the seed packet below – any dwellers in France who know more about them than me, feel free to comment! 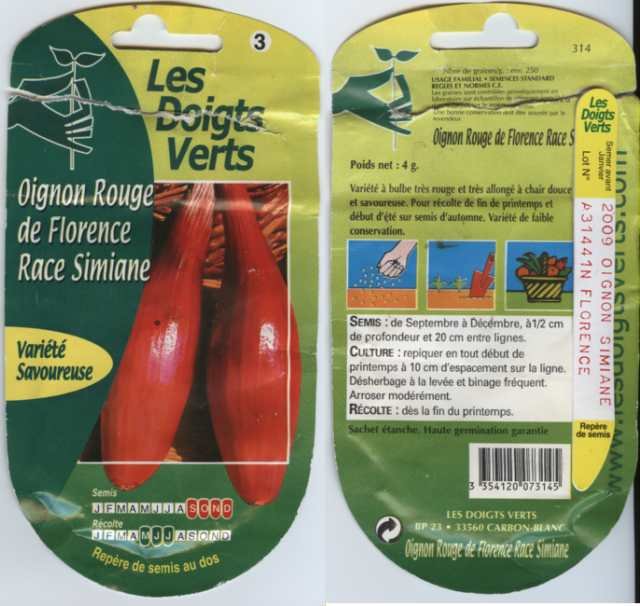