Well October certainly went out with a bang, although we missed the storm completely here. I read that the extra energy from the warmer autumn and winters we are having means we’ll get more violent storms in the future, not a pleasant thought.

Being where we are, in the foothills of Snowdonia and open to the sea, we regularly get strong winds and are learning you cannot relax for a minute. We lost a greenhouse due to not having the base properly fixed in the past. You’d think I would learn but recently I forgot to put the brick that held the doors closed on a tall coldframe and the wind got up in the night and ripped the doors off.

The new vegetable plot has a wall to the west and north side, which provides some shelter but the open sides to the south and east let the wind whip in. My cunning plan is to use windbreak netting attached to the fencing to provide shelter.

It’s surprising how much difference providing shelter from the wind will make. Those Victorian master gardeners with their walled kitchen gardens knew this. The twelve feet high walls carried the wind over the garden providing a micro-climate just that bit better for the vegetables and extending the season.

Extending the season was important for those gardeners, His Lordship in the big house liked to impress his guests with fruit and vegetables out of season in time when importing beans from Africa and tomatoes from Spain was unimaginable.

Large hoop cloches using netting instead of polythene sheet are great for growing brassicas. Not only do they keep away pesky pigeons and stop butterflies laying their eggs but they also protect against wind rock.

Wind rock is where the plant is moved around enough to break the fine, near microscopic, root hairs which are responsible for taking in nutrients. Even if the plant looks stable, without those root hairs it won’t be able to eat enough and the plant slowly starves.

The visible symptoms are yellowing leaves and with Brussels Sprouts, the most susceptible of the cabbage family to this, blown sprouts. Staking sprouts is one solution but not very effective in my experience as high winds rock the plant against the stake. Large net cloches or providing windbreaks is far more effective, slowing the wind and providing that micro-climate.

Additional feeding of sprouts with a high nitrogen feed is a good idea at this time of year anyway but with root damaged plants extra feeding is the only hope of a solution. It allows the surviving root hairs to take in enough to often save the day.

You don’t need to spend a fortune to build a wind barrier, this brassica cage was built from scrap wood and netting. It’s not pretty but it is effective. You can pick up netting very reasonably from Harrod Horticulture and currently get an extra 10% off using the code JH10 at the checkout. 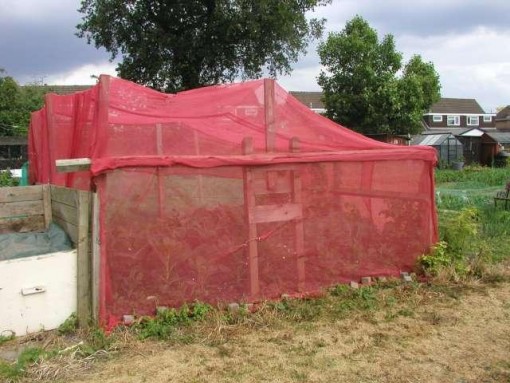