I didn’t get down to the plot over the weekend but it wasn’t all bad news. We did a final sweep of my father in law’s house on Sunday as he’s moved and the clearance people are coming to empty the furniture and so forth he no longer wants.

I have to admire his attitude, he’s taken what he wants and left the rest behind without a backward glance. Now he’s in sheltered housing with a warden and emergency cords in every room, we feel happier about his welfare but most importantly, he’s really enjoying it. He’s got company when he wants it in the common areas, a low cost lunch available if he doesn’t feel like cooking and the privacy and independence of his own flat.

Anyway, we came away with a bag of compost, a pile of good seed trays and a long handled, flat tined fork as well as a few personal bits. I’ve got a long-handled fork that we got in France but this one is slightly smaller and an awful lot lighter, which makes it perfect as a potato fork.

Monday was a ‘chained to the computer’ day. I’ve written a fairly complex series of scripts and there was a fair bit of de-bugging to do. This tends to involve many cries of “why on earth is it doing that?” but it’s all done now.

Tuesday was busy as well but I got down to the plot late afternoon. Even an hour is better than nothing and that bit of fresh air is good for the soul. The first thing I noticed was yet more wood chippings had been delivered.

I don’t need any more, having re-covered all my paths, but it’s nice that everyone who wants some can get some without the panic of “If I don’t grab it now, it will be gone”

The recent winds have caused a bit of damage on the site. Ripped the felt off a shed roof and caused some greenhouse damage. The lid had gone flying off the black compost bin but otherwise all seemed fine until Larry pointed out that I’d some slipped panes in the back of the large greenhouse so my first job was to fix them.

It’s critical to repair a greenhouse as soon as you can. If there’s a gap then you can bet the wind will get inside and then you’re in real trouble. A lot depends on the direction the wind’s in, but it’s the law of sod every time.

I had to take all but the bottom pane out of the centre column and re-fit them. I’d like to know how come you can watch a glazing clip fall, see where it lands but when you bend down to pick it up, it vanishes! There must be a parallel universe somewhere full of greenhouse glazing clips and odd socks.

The greenhouse being weather tight again, it was back over to plot 5. Bit late to start digging over by now as it was getting cold as the sun fell lower so I cleared the Brussels sprouts that were left in and a few other bits before heading back to the ranch.

Photo Below: Slipped Pane in the Greenhouse (Yes it is filthy!) 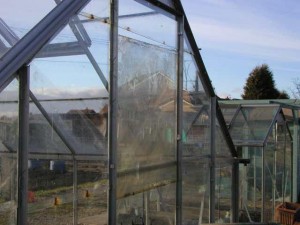