This morning started sunny so, despite the weatherman’s talk of storms, it was to the plot. It literally started to rain as I left the house! Well, I thought it might blow over and as it happens, it did. 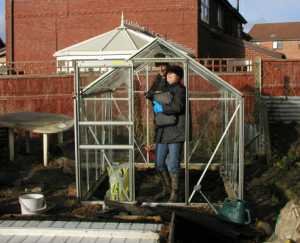 I thought the site would be empty, but Lee and Karen were obviously as mad as me and were busily glazing their new greenhouse. Their plot has been transformed since they took it over. Raised deep beds, neat pathways and now a greenhouse. They demolished the old rotten shed and a new one is waiting to take its place.

It’s really nice to see the way the site as a whole has improved over the years I’ve been on it. It’s just about 5 years since I took the plot on, doesn’t seem that long at all.

It took me most of the first year to get plot 5 properly dug over. I remember wondering if I’d ever get it under control. The weeds were coming up behind me as fast as I dug down the plot!

Eventually I reached bottom of the plot and built the compost heaps. The sense of satisfaction on that day is hard to explain. Rebuilding the heaps was not quite as satisfying but it was rather good to finally get them done.

When I think about, five years life for the old heaps made from palettes isn’t too bad. The new ones, being made of treated wood, should last at least another five years and being solid sides and back the weed roots from the other side of the fence shouldn’t be able to get in either.

Before I had the shed on the plot, I used to hide some tools behind the heap, sliding the handles into the gap in the palettes. I don’t know why I bothered hiding them in hindsight. One of the plots on the site hasn’t seen the plot holder for six months and they’ve left their tools just standing there.

It’s obvious they’ve given up but bureaucracy takes a while before the plot is officially vacant and someone else can have a go. This temporary nature of an allotment is something I’ve never been that comfortable with. Why spend a lot on fittings and beds on something you only rent? Well, when you think about it, whatever we do is temporary.

We’ve moved house six times in thirty years, each time improving and adding to places, only to move on and leave it all behind. I don’t suppose we’ll be here for ever so why not spend a bit on the plot? As well as the saving on food costs, my allotments provide me with many hours of pleasure. I bet it would have cost a fortune in the gym!

Having got the compost bin built it was time to start building the heap itself. On the base went the old sweetcorn stalks. These will allow air to get up under the heap, aiding decomposition. Next went on the stalks that had been in the old heap but hadn’t rotted much, followed by a layer of partially rotted stuff from the old heap and the last cut of comfrey that was rotting down as it waited for the heap to be built.

A sprinkling of lime followed, this keeps the heap from being too acid to allow the microbes to work. Next went a layer of weeds that had been piled up on the plot with a small sprinkling of sulphate of ammonia to boost the nitrogen level and help them rot in. Finally a doubled up piece of carpet to keep the heap from getting too wet and to keep some warmth in and light out.

When I emptied the old heaps, there were quite a lot of bindweed roots at the bottom and a couple of dock roots that were re-sprouting. These all went into the barrell  where I still have some comfrey liquid. They’ll drown and rot down, given up their stolen nutrients to the liquid.

Because the centre panel hasn’t settled in, the pressure of the contents of the bin could force it open so I propped it with a beam. Once everything has settled and firmed up, the beam won’t be needed.

A quick trip to small greenhouse where the chilli peppers have finally given up the ghost. Picked about a pound of wickedly hot peppers. We’ve enough hot peppers to keep an Indian restaurant going for a year.

The sun was sinking fast so spent five minutes sitting on the bench just watching the sky before I headed home.

Photo below: The refurbished compost bins on plot 5 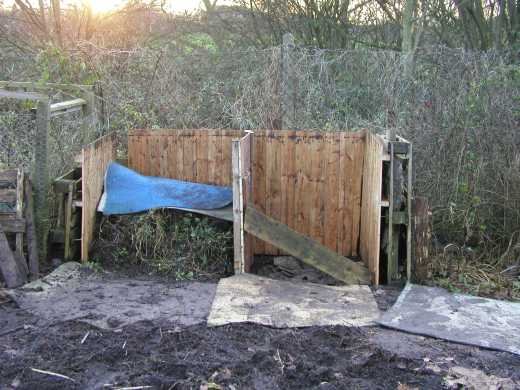