Hit a great bargain yesterday. I’m not an organic grower but I use very little weed killer. Mainly I use ammonium sulphamate on the horsetail on plot 29 and a small amount of glyphosate on stuff like couch grass and bindweed that are really hard to get out. When I say small amount, I’ve had a ready mixed sprayer of glyphosate that has lasted me nearly two years.

This year the weeds have grown beyond reason, the path between myself and plot 4 is overgrown and a spray seems like the best solution. So down to Wilko’s for a sprayer which is supposed to be £12.98 but when we got to the till it was actually half price. Result! A seven litre pressure sprayer for £6.50 can’t be bad. Bought enough Roundup to last me a century for £12 and ready to go. Defoliation of the jungle area of the plot is probably going to displace the tribes of pygmies living there but life is tough.

So in weak autumnal sunshine (getting poetic in my old age) headed to the plot and gave the new sprayer a work out. One fill did the path between plots 5 & 4 and most of the path between 29 &  Janice & Gianni’s plot.

The next job was to take a few photographs. I’ve been asked about their plot since I mention it a lot. Actually, if I worked for the BBC, I’d claim it was my plot and hold a phone in competition I suppose. 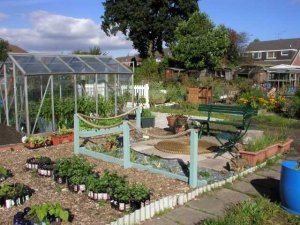 Anyway, their plot is obviously their little bit of heaven and it shows. I don’t know where they get the time from. As well as the photo on the right of their seating area there’s another of their shed in the photographs section.

They have the sea in their blood and came across the length of hemp rope or is it hawser? that has formed the fence around the patio and is artistically coiled on the patio. Note the matching blue slate on the border behind the rope fence. The small raised beds are edged with bottles. The poor couple are obviously forcing themselves to drink a lot for the sake of the plot!

Back down to plot 5 and I dug over where the raised bed is going. I’d dug it over and rotovated before the year’s rain started and since that time it has hardly been stepped on but the ground is really very solid. I think all the water has caused it to compact just as if it had been stamped on by a herd of elephants. It took about 3 hours to dig over 15 square yards not including nipping home for a cup of tea and a couple of ibuprofen. The pills were because I could feel my sciatica coming on and I was determined to at least get the digging done.

By 6:45 the digging was done so I sat on the bench to recover with a ciggy and watch the sunset behind the trees. I re-read the instructions on the Roundup and discovered I’d misread them first time. They state that you add 30 ml to 5 litres in a watering can but to 1 litre in a sprayer. I, of course, had only added 30 ml to 5 litres in the sprayer.