I watched the weather forecast last night and it was quite clear. Overcast with rain coming in from the west that should arrive around 4pm. So at 8am why was it raining? Not heavily, to be truthful, but still it was drops of water falling from the sky. It didn’t get much better through the day so no allotment for me today.

Now for the good news. I’ve been sent some seeds to try out from Canada – thanks very much Gloria, really appreciate your kindness.

Tomato Yellow Pear. An old variety, at least 200 years old, also known as Beam’s Yellow Pear that is a low acid, cherry type tomato supposed to be good in salads.

Tomato Green Zebra. A US variety (available in the UK) developed by Tom Wagner of Bakersfield, California and released in 1983. Apparently productive with a tangy taste.

Tomato Mortgage Lifter. A beefsteak type tomato that produces very large pink fruits. Another US variety that is available in the UK Apparently its creator sold plants to pay off his mortgage. Wish I could do that! It’s developer M C Byles had a radiator repair business that failed in the great depression and bred this strain from four others. Hence it’s also called Radiator Charlie. 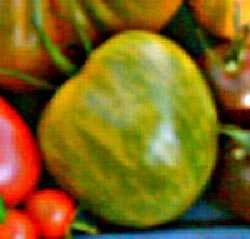 Tomato Jaune Flamme. A French heirloom variety that has clusters of small tasty orange fruits apparently good for salads and for drying.

Tomato German Gold. aka Mammoth German Gold. As the second name suggests a large tomato from the 1890s. Gloria tells me these are 1-2lbs fruits bicoloured golden yellow with red striations throughout. She warns me to pick before fully ripe and finish them off inside as they have a tendency to fall off the plant and rot.

Tomato Carolina Gold Now I’m a bit confused on these. According to Gloria they are a Mennonite heirloom variety with a round and meaty fruit but google insists they are a modern hybrid variety and so seeds can not be saved. I love a mystery! I’m certainly not looking a gift horse in the mouth either.

If I succeed with all these then we’ll have enough tomatoes to set up our own tomato ketchup manufacturing plant. Watch out Heinz!

She also sent me a couple of lettuces.

The first is an Austrian variety, Lettuce Forellenschluss. The name means ‘speckled like a trout’s back’ and they have attractive green leaves with red speckles. They’re also know as Flashy Trout Back. This romaine (cos) style lettuce is also very frost hardy and holds up in the heat so it should be a great one for early spring.

The second is a French heirloom lettuce. I suppose French heirloom’s would be popular in Canada because they have a lot of French descended citizens, Many French left France for Canada following the British annexation of the Dordogne, which is now known as Dordogneshire.

Going to be interesting to see how I do with them next year.
Posted in Allotment Garden Diary

Leave a Comment Here on Seeds from Canada! Cancel reply