Saturday almost lived up to the weatherman’s promises. Actual sunshine for most of the day, although it got cloudy late afternoon and rained from early evening.

Despite the clement weather, I didn’t head for the plot immediately as the potatoes in the shed were in dire need of attention.

On just entering the shed you could smell the blight. If you’ve ever smelled potatoes going off with blight, you’ll know it. A distinctive sour smell that revolts us as nature intended. I have a theory that we’re genetically programmed to avoid certain smells, like rotting meat so we avoid poisons and disease.

Anyway, potato blight. The worst part of the blight is that not only does it kill the foliage but if the spores get onto the tubers they rot as well. This, of course, was the cause of the Irish potato famine.

Once one potato in a sack turns to a putrefying mass of rot the rest of the sack soon follows. Nowadays non-organic farmers spray their crops with various fungicides including systemic ones that protect the tubers but not those grown organically.

So we emptied the sacks out onto some old shower curtains on the back lawn and picked out the bad ones. To be more accurate, we picked out the good ones. One thing I noticed was that the smell of blighted potatoes attracted bluebottles. It actually came in quite handy for spotting ones starting to go as the flies would be on them and ignoring the good ones.

Having got them sorted the next thing was to wash them to remove any blight spores. Ideally I suppose some sort of fungicide would be good but in the absence of that I put a drop of bactericidal hand wash in the water and gave them two washes each. I don’t know that this will work but I really don’t want to lose what has been one of the best crops of potatoes I’ve had in store. So far I think we’ve lost about a third of the crop.

We dried them out but didn’t want to put them back in the sacks as they would be full of blight as well. Val’s solution was some old pillow cases, which will do the job on a temporary basis. We put the hessian sacks through the washing machine and hung them out to dry. Putting the potatoes into damp sacks would be as bad as blight. Our neighbours probably think we’re absolutely mad! Of course it rained before they dried so it depends on the weather, again.

I did pop down to the plot for some lettuce and spring onions for a salad and discovered the blight had spread quite badly in the large greenhouse since yesterday. Trimmed off a lot of leaves, removed the odd tomato with a brown patch from the trusses in the hope of slowing the blight’s progress at least and getting some ripe tomatoes.

I also added some SM3 seaweed extract to the water and watered. Next I gave a spray over the foliage with SM3 as well. The idea is to give the plants a ‘vitamin shot’ to help them resist. I doubt it will do much good, but it can’t do any harm.

The photo below is of some of the potatoes as we were sorting them. 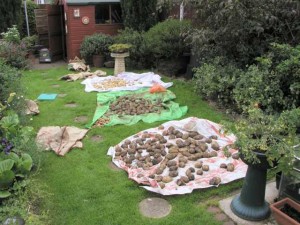 Sorting Potatoes on the Lawn