Actual sunny spells today although we did have one short shower. I listen to the weather forecast as if my life depended on it but it rarely seems to be talking about the same place. A fine sunny day, says the weatherman and the chance is that it’s pouring down here.

I suppose it’s hard to see Cheshire from your window in London.

The New Toilet Arrives on the Site

The council have brought us a loo. I can’t say it will make a lot of difference to my life as a bottle in the shed serves to collect my liquid compost activator and I only live around the corner for other needs (wasn’t that delicately put?) I’m sure it will be very welcome by many on the site who come from further away or those who find a bottle difficult to use like the female contingent.

Apparently it was originally placed a bit of an angle so Larry and Gianni had levelled things up and created a base from some slabs. They’d also created a solid patch around it with stone chippings since heavy traffic will churn up the soil into a mud bath.

We get the occasional trailer on site to take away the rubbish that just doesn’t get recycled and this time it had arrived full of stone chippings. The chap had cleared the car park with a small bulldozer before tipping the chippings out.

It was amazing how much bigger the car park looked.

Despite it being quite a pile of stone, I know how quickly things can disappear so my first job was to barrow over a load to fill the ruts in the main path in front of plot 5.

It took about eight loads, which doesn’t sound much until you do it, to fill the rut. The large paths are useful if a lorry comes as it did to deliver the compost or someone is bringing a load to their plot.

Unfortunately certain people find walking 20 or 30 yards from the car park to their plot very tiresome and so drive to park by their plot. It doesn’t really matter to them that they’re adding to the problem of the path churning up and deepening the ruts as long as someone else can cart barrow loads of stone to ensure their little legs don’t wear out.

Larry and I consider blocking the path earlier in the year to stop this damage but there are a couple of people who need to drive to the plot. One chap comes with his wife who can’t walk so she sits in the car as he tends his plot.

Had a gentle rant at one miscreant about his driving up to his plot so he gave me a really nice cucumber and some runner beans. I agreed not to name and shame him on here, which I suppose is technically blackmail. You are charged with demanding cucumbers and runner beans with menaces! I wouldn’t really have named you, Mr X.

My Ailsa Craig onions are looking rather good on plot 5. They grow large but seem to store well and they’re coping well with these wet conditions. Growing onions from seed is not difficult and I don’t think I’ll bother with sets next year.

The sweetcorn is about the best on the site. Large an lush with two cobs on most plants so next year we will be mostly eating corn and onions by the look of things. The brassicas we won’t discuss for my shame. I go along to the NVS and see these chaps with cabbages that take a fork lift truck to lift and then look at mine on the plot and wonder what went wrong.

My worst fear has come true, blight in the large greenhouse. The outdoor tomatoes are a dead loss but the indoor were my last best hope. A forlorn hope, it seems. Never say die! So I cut off offending leaves in the hope of ripening a lot of the green tomatoes and improving air flow.

I’ve planted too close in the main greenhouse which wouldn’t have been such a problem if the weather had been normal. In this dull humid weather a big mistake. I’m also going to give them a spray with SM3 seaweed extract in the hope it well. I’ve no evidence to suggest it will but I know it will do no harm and you never know. A little boost to the plant’s immune system might just save the day.

Left the plot around half eight as Larry was happily filling the water tank in the toilet. I did suggest once we should have a composting green loo but that went down like a lead balloon and we have a chemical loo.

There are a few pictures I took on the July photograph section and this is the photo of the super loo. 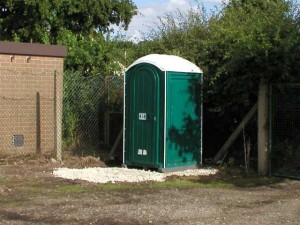 A Toilet on the Allotment