Back on the plot

As I mentioned in my last diary entry, we’ve not been too well with colds and flu but finally, at last, we seem to be over them. We haven’t just sat around drinking hot lemon and swallowing pills, though. I’ve been putting up my rants and raves about chickens, supermarkets and such like and Val’s been busy converting bargain tangerines into marmalade. She was adapting a recipe and had some trouble getting it to set and, under the circumstances, I felt it best not to comment on my best cognac that went into it.

So for the first time in what feels like months, it was a pleasant day and I felt in need of some fresh air, so off to the plot.

Lee was just leaving as I arrived but Larry was down there, although I don’t think he’s been doing much. I haven’t been paying too much attention to the weather but judging by how wet the allotment site is, it has rained a lot.

Larry didn’t stay long, so I was all on my own on the site except for a new cat who was busily hunting a mouse. I’ve not seen her before, but she’s a good hunter and I expect the rodent population will be somewhat reduced if she keeps this up. I got her in the camera lenses, mouse in mouth but as I clicked she dropped it. Typical cat!

Down on plot 5, the wind had knocked over some pieces of wood on the decking but otherwise there was no obvious damage. However, the netting over the cauliflowers was off. Now I know that I left it in good order and it’s a bit beyond a pigeon to move it, fixed as it is to 2×1 battens so it’s a human rat.

Larry reckoned we’d had some kids on the site so maybe they’ve been playing silly devils. Anyway, the pigeons have had a good old feed. Having fixed that back up, it was time to try my new wellies out. Val had some psychedelic Wellingtons in the sales with some of her Christmas money but I’ve stuck with plain green, Dunlops. Traditional, me.

Over to plot 29, where the empty compost bin had blown over. Set that to rights and it was to the leeks. They’re not the best leeks I’ve ever grown, but perfectly acceptable and I was under orders to return with some. I’d taken the contents of our kitchen waste bin down with me, so trimmed the leeks and layered them in the bin with the kitchen waste.

I seem to have been carried away a little harvesting leeks, so I’ll be making some soup as well. We’ve some stilton in the fridge going past its best so I think I’ll be experimenting.

Back over to plot 5 where I got some more Brussels sprouts off. They’re coming to an end now but I think there’s a few meals still to come if the pigeons don’t get through.

I thought about finishing the third raised bed off, but it was getting cold and, being so wet, I thought I would be bound to fall over, knowing my luck.

The more rain we get, the more convinced I am that moving, at least in part, to raised beds was the right idea. I’ve never been a 100% convert to raised beds but they are easier to cope with in monsoons. The weather seems set on yet more rain next week, which is not good. I’d much rather have some crisp cold and dry.

Photo Below – the raised beds with fleece over the garlic to keep the birds off. There’s more photographs in allotment photographs. 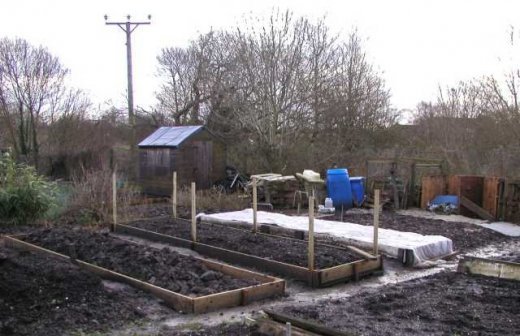 Leave a Comment Here on Back on the plot Cancel reply