I’m sorry I’ve not posted for a bit, things have been a bit hectic. Last week we went down to see our good friend Richard Cannon, star of Korean TV and BBC South East. He downshifted some years ago to a lovely secluded cottage near Ashford in Kent.

He runs the ‘Down The Lane‘ web site from it’s magnificent office campus just a stone’s throw from the house. OK, it looks like a shed in the garden to me, but he calls it HQ!

Whilst we were down there, we grabbed the opportunity to do a quick shopping trip to France. Whilst a supermarket is a supermarket, there is a difference between the French and British. Not just the wine and beers being a lot cheaper either. The French have a more rural society than ours. Of course they’ve cities and all the problems that come with them but you realise they’re more rural and self-sufficient than we are in the supermarket. Less ‘ready meals’ and more fresh foods along with vinegars for pickling (clearly marked 6% acidity), Kilner jars and spare gaskets and even alcohol for fruits – unflavoured 38% by volume.

We dropped into a DIY shed, Leroy Merlin, and again the difference was clear. Greeted by a row of stylish woodburning stoves we moved on to the garden section where the water butts were somewhat bigger than those you’ll find in UK shed. 700 litres and up. Serious water saving. The rotovators and ride on lawnmower tractors held me for a good half an hour plus some rather good log saws and splitters. I resisted temptation and made do with 4 litres of chainsaw oil as it was on ‘offre special’

Over to the seeds section where I got some of my favourite carrot seeds, Touchon, along with some bulk boxes of bean seeds and a pack of Black Crimea tomato seeds. The sow by date is 2016, so they’ll keep.

Back home where I discovered I can’t take long drives into my stride as I used to. Felt like a zombie the next day.

This week has been fun. The first of the storms swept through and I noticed the greenhouse doors had blown open. So out in the gale to close them only to realise one of the roof panes had gone. Amazingly it was lying some 20 feet away from the greenhouse, undamaged. We managed to get it back on and put extra clips on to hold it in place. It’s toughened glass, but that’s above and beyond.

Today was a doozy. It stormed again through the night and so I opened the curtains with some trepidation as to what I would find. Good news, the greenhouse still stood and looked in good shape except it was flexing in the wind.

The next thing was a massive gust. I believe one was registered at 100mph near to us. I realised the same pane of glass had flown off again. Now this is where it becomes crazy – an 8×2 feet piece of glass has vanished!!

I tramped around searching with Val, peering over the wall into the field next door but no sign. In the end we gave up and came back in, soaked to the skin. No sooner than we’d got changed we noticed water pouring in through the back door. The drain was blocked with leaves and the water was over the step.

Back outside to clear the drain which I finally managed but not before getting soaked through again and the water had trickled through to swamp the bathroom floor. It didn’t stop there though.. Val called from the cowshed to say there was a leak.

We’d had a land drain installed behind the shed and it had been tanked on the wall below to keep it dry but our defences were overwhelmed. It was like a hosepipe discharging through the wall and a stream running through.

We’ve often joked about being immune to flood being 600 feet up a hill. Yeah, pride comes before the fall. At the back we had streams running down the hillside, the field below flooded for the first time we’ve seen. The track to the side of us was running like a river and sweeping the aggregate away.

As I write this, the news is showing scenes of a nearby village Rhostryfan that I think is higher than us with the streets under water. Perhaps it could be worse! 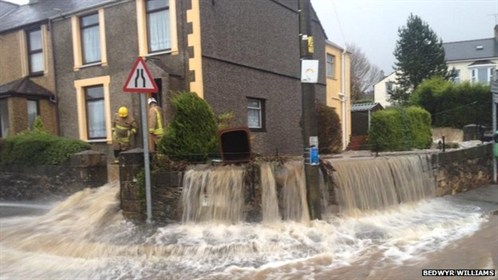 Leave a Comment Here on Tempest and Flood Cancel reply