One of the things that bugs me as I get older is health and safety. It’s not just the molly coddling, it’s the way you’re treated as an idiot. In no small part I blame the Americans and their court system. If you drive around with a hot cup of coffee in your lap, it’s pretty obvious that there’s a good chance you can spill it and burn yourself. Not in America, you sue the supplier and get a walloping great payout. So, when you buy a coffee in McD’s it’s helpfully stamped on the cup that the contents may be hot.

When you buy a power tool or machinery like a shredder, the instructions consist of pages of safety warnings like ‘don’t stick your hand in the shredder’ or ‘don’t drill through live electric cables whilst stood in a bath of water’

In fact there’s so much of this back-covering, don’t sue us because your IQ rivals a stone nonsense that it’s hard to find the information you actually do need to know. And what annoys me more is that I have to be careful what I write in case someone decides it was my guidance that led them to do something stupid and injure themselves.. or so their no-win, no fee lawyer reckons.

Now of all the tools I have, the chainsaw is probably the most dangerous and the one requiring the most maintenance and knowledge. And not just for chopping down trees (don’t stand in front of the tree in its direction of fall when felling) but even for just cutting up logs.

For a start, oil. Having bought an electric chainsaw I was surprised to find it needed oil. A petrol one, sure but what other electric tool needs oil? Well the oil is used to lubricate the chain which whizzes round the blade at 16 metres per second (or faster). Let the oil run out and pretty soon it will breakdown.

There’s a little reservoir in the body that you need to keep oil in. Check before you start it and check frequently whilst using it. It’s not difficult to go through a litre of oil in a day’s work.

Then there’s chain tension. If the chain is loose it could come off which would not be pleasant. So, before using and occasionally whilst using you need to check that there’s not too much play. Roughly 3mm on my saw.

And cleaning. You’ll be amazed how much sawdust accumulates, potentially clogging the oil dispenser or jamming the works. After each use, allow 10 to 15 minutes to clean the saw out. Checking the blade and chain for damage and sharpness at the same time.

The chain will need sharpening, sooner than you’d expect. You can do it yourself but I’m not too good with engineering so I found a firm on Ebay who do it for you. Many equipment shops will do it for you as well. 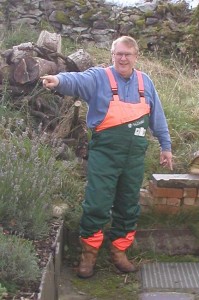 Me in disguise as a 1970 Children’s TV Presenter

OK, here’s where it does get a bit mad and I admit to having been a bit silly in the past. I’ve used the saw without any safety gear whatsoever. I’m careful, know enough not to try using it whilst balanced on one leg on top of a ladder and so forth. However, I am a bit of klutz (clumsy) at times and a couple of tales about the injuries you can get made me decide to get the gear.

The mad part is that the safety gear costs more than the saw! First of all a helmet with a mesh visor to stop chips hitting my eyes and ear defenders to avoid deafness. Actually, with the electric saw – despite the safety instructions, I don’t feel the need for the ear defenders. But useful with the noisy petrol strimmer.

Next gloves, with kevlar in the back of the left glove – so bulletproof as well! Seriously useful if the chain breaks and whips over your hand.

Now the most common accident by far is to slip and cut your leg. So special trousers are called for. Mine are dungaree style in fetching green and orange. I look just like a 1970’s children’s TV presenter!

I was told of a professional tree surgeon who decided he didn’t need them one hot day (they are lovely and warm). Oops, he whacked his knee and it was off to A&E. Not as bad as it could have been, just 6 stitches. He even went back to work that afternoon and.. yes, hit the other leg.

That’s just the starter kit – recommended in addition is a jacket and special boots.

So finally, dressed not to be killed, I chopped a lot of logs which will come in useful now it’s cold.