Will this weather settle down? One day it’s T shirt the next it’s thermal vest, shirt, sweater and jacket! I know we’d be in a mess without some rain but is a little restraint in the weather too much to ask for? And another moan, this wet but relatively warm weather is great for slugs. I’ve never seen so many as this year – the winter was relatively mild and that got them off to a good start.

Anyway, we get by with a little help from our friends as the song goes. The clutch has been playing up on my strimmer which is annoying. I bought it in March 2011 so it’s only 15 months old and it hasn’t been exactly worked hard. You may recall I slipped the cartilage in my knee last year whilst strimming so it hasn’t done anything much from then until this year.

I resigned myself to paying to have it fixed but Gwiz , the allotment forum’s resident machinery guru, emailed to remind me it has a 2 year warranty. I rang Mitox who confirmed this and said all I needed to do was give the dealer a copy of the bill. Thanks Gwiz!

Next was down to Abersoch, which is quite an upmarket seaside resort. My pal Tim runs a boatyard there and offered to look at my Merry Tiller, which has failed to start after sitting idle for 18 months. Tim looks after all things to do with boats including outboard motors and engines that are a little more powerful than the 5hp Briggs and Stratton the Merry Tiller boasts.

As well as fettling engines, he’s a lifeboat man and produces a weekly weather report that has to be seen to be believed. All I’ll say about that is ‘probably go boating!’ It can be seen on his web site Abersoch Boatyard.

So, we wheeled the Merry Tiller into the engine repair room where the mechanical surgeons operate. What fascinates me is that they’ve fewer tools lying around than I have but they always put their hand on the right one where I spend half an hour searching and can’t find what I want!

Pretty soon she coughed and sputtered into life and was ready to compete with most of the other engines in there. Well maybe not the 100 hp jobbies. Thanks Tim – gale force winds tomorrow, so probably best to go boating!

On the way back I called into a garden centre near Pwllheli (try saying that with your teeth in) and picked up a couple of Timperley Early Rhubarb in large pots. When I visited Medwyn Wiiliams place he was growing his rhubarb in individual raised beds. 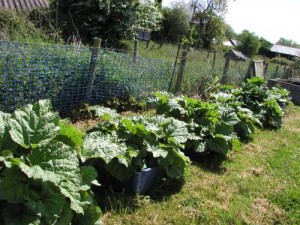 His reason was that rhubarb has to be split every three or four years and this method made it very easy to lift the plant, by lifting the raised bed. Well, if it’s good enough for Medwyn, it’s good enough for me. Plus, preparing a decent bed in our rocky thin soil would be difficult at best.

I’ll make the beds from 6″ fencing boards and some scrap wood I’ve got lying around. They’ll be 500mm per side and 300mm (12″) high. The boards cost just under £6.00 each and are 4.8M long, so the cost of each bed will be about £6.00. Not too bad for something that will last years and hopefully produce some excellent rhubarb.

Knowledge is knowing rhubarb is a vegetable and tomatoes are a fruit. Wisdom lies in knowing which one to pour custard on!