Sunday was a glorious day here so I made the most of it. The first task was to cut back the overgrown hawthorn hedge, especially the branches overhanging the comfrey bed. It doesn’t sound much but it’s one of those jobs that’s a lot bigger than you realise when you get started.

After a few hours I’d another pile of trimmings but hardly made an dent in the hedge. I must admit I’m not comfortable using a chain saw, especially leaning over from a ladder so I may just pay a chap from the next village to finish the job. He’s quick and reasonable and will probably do a much better job than me anyway. 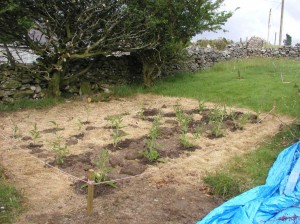 I’d killed off the grass on the comfrey bed and ideally would have dug over the bed, incorporating manure as I went. But time is ticking along and the comfrey roots were coming out of the bottom of the pots. So I just dug planting holes for each one, adding fertiliser and compost as I went.

I was actually out until 9:30pm. I did notice the midges coming out but it wasn’t until I went in and they started itching that I realised I’d been bitten. Both my arms were (and are) covered in nasty little red blotches along with my ears for some reason. I’ve never been bitten so badly, worse than Spanish mosquitoes. 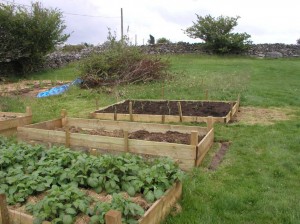 Tuesday was spent building the fifth raised bed. I realised the land sloped that much that hardly any of the back board would be above ground so the bottom back board was replaced with a length of 2×1, which is cheaper.

Next I constructed a frame from 6″ fencing board. It’s 3M long and 1.8M (10′ x 6′) just laid on the ground and filled with the Moelyci compost. Well half-filled to be honest. The midges came out and showed no regard for my insect repellent after shave, so retreated inside.

The idea of this bed is that it isn’t permanent, just held in place with some stakes. The grass had been killed back and then the turf cut with the Mantis

. The normal blades kept choking with the grass but the furrow digging blades did the job.

By next year the grass will have rotted and compost will have been taken down a bit into the ground by the worms. I’ll move the bed to another spot and cultivate the land. I reckon by the time I’m 65 (2020) I’ll have a 10 pole plot of fertile soil! 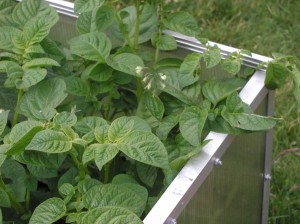 The first early potatoes planted in a raised bed and covered in a cloche are flowering, which tells me there will be tubers ready or nearly ready to harvest below.