This weather is driving me mad. One day it’s 20 degrees and the next fallen below 10. Still, I suppose I should be grateful not every day is below 10 and raining. I managed a little time in the greenhouse on Sunday but even in there it was miserable. Monday, however, wasn’t a bad day at all. 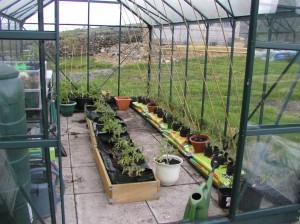 Tomatoes planted in the greenhouse

The greenhouse is now fully set up for the summer. On the easterly side I’ve a row of a dozen tomatoes in double grow bags with the canes in place for them as they grow on. I’d left the tomatoes a little long in 3″ pots and they’re looking a bit sorry for themselves but I have some hope.

A few years ago I attended a lecture from a show grower who said he left his tomatoes in small pots until they looked very sorry for themselves and then planted them out, where they sprung into growth. If he’s right then I’ll have a great crop.

In the centre of the house I’ve three of the 100 litre large growbags held in wooden boxes, these have the bush tomatoes in them. Plus a couple of tomatoes in large pots.

Up at the north end of the house, I’ve cucumbers and on the staging I’ve peppers in large pots.

What NOT to do when growing tomatoes.

I was chatting to a neighbour who told me of a friend that decided to start this grow your own lark with some tomatoes. He got some plants and set them in growbags, fed them and made sure they were watered.

The plants did really well but no fruits appeared. Not only had he removed the side shoots, but he’d carefully picked off those little yellow flowers as they appeared! (For first time growers, the flowers are what turn into the fruits) One of those you don’t know whether to laugh or cry moments. 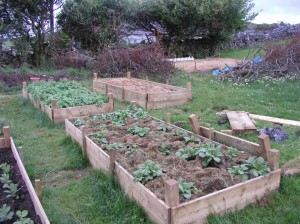 I’ve three raised beds of potatoes. The first two planted up are showing well but the later planted bed has yet to show. I’ve also three plants in a small raised bed with coldframe attached that are the furthest on.

All of them got a good spray with Medwyn Williams Liquid Gold foliar feed.  I’ve never used this before, but Medwyn reckons it gives great results so fingers crossed. Since I’m effectively small-space gardening due to the lack of decent land, maximising performance from what I do have is the way to go.

Lesley Acton who has written on the history of allotments for us is undertaking a survey. She’s trying to find out how long a typical allotment lease lasts and how difficult it is to negotiate these days. If you could spare a few minutes it would help her no end and she’s promised to let us know the results. No personal data is collected. Allotment Lease Survey