The last week has been frustrating from the gardening point of view and a bit of an upheaval to our life. Frustrating because the weather has been wild. When it’s not been raining, the wind has been blowing a gale. Erecting a greenhouse in those conditions is a bit beyond me!

Last night or more precisely 3am this morning, there was yet another storm, this one really went for it. The wind was screaming in from the sea and the rain sounded like gravel being thrown at the windows. This morning I heard that whilst the noise was keeping me awake in my nice warm bed, 8 sailors were abandoning their sinking ship and lifeboats and helicopters were trying their best to save them just 15 miles offshore. Makes you think.

The upheaval in our lives is because we made the mistake of visiting the local animal rescue sanctuary on Tuesday. Despite our best efforts to be strong, we came back with two more rodent control operatives. Luther, a young black tom cat and Amber the most beautiful pale ginger queen. She’s at least part Abyssinian. 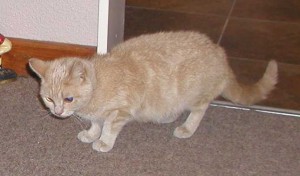 After a day I noticed Amber seemed to have some vision problems and the vet confirmed that she is basically blind. What’s amazing is how well she copes, honestly you wouldn’t guess on first meeting her, which is why I suppose the rescue missed it.

She’s already trying to get outside but we’re worried in case she gets lost so we’ll be buying a radio tracking system that has a collar chip. It’s a bit of an expense but adopting a pet is a bit like marriage, for better or worse, in sickness and in health.

I used to think that keeping a blind cat was probably cruel and they’d be best put to sleep. I now know how wrong that was. With any pet it’s quality of life that matters and Amber may be blind but she’s living life to the full. This morning she was playing with a tinkly ball and then chasing the kitten at full pelt around the house.

One of the jobs on the ever growing list of things to do is to deal with the mass of brushwood left over from the tree surgery. I really want to shred them and I have a rather good 8hp petrol shredder, courtesy of ebay. The problem was that I couldn’t get it to start after sitting idle for over a year.

Our local garden machinery fettler got it running though. The problem was that the fuel in there had evaporated leaving gummy deposits in the carburettor which he cleaned out.

Apparently petrol (and diesel) can start to go off in as little as a month of storage. You can buy an additive by Briggs & Stratton that you put in petrol to stop this and keep the internal parts of the engine clean. Got mine from Ebay. Adding a small amount keeps the fuel sweet and they suggest a larger amount for when the machine is going to be sitting for a longer time, like the winter.

Anyway, got the shredder back but the safety guard was off so we could transport it. Bit of bad design, to attach the guard you need long arms as the fixings are at the bottom of the guard and you need both hands. Val tried to help but her arms aren’t quite long enough and we ended up with a spanner in the works, literally. So awaiting some help from my neighbour when he’s passing.

Whilst I was trying to sort the shredder, Val was busy planting daffodil bulbs to the side of the track. She asked if I’d give a hand moving a couple of rocks from under the turf. Out with the trusty mattock for a two minute job that turned out to be longer. Two of the rocks were that big I could hardly lift them. Still, done now and the rocks are in the wall.

All I need are a few decent days to get the pressing outside jobs done – but the weatherman isn’t being cooperative. Oh well, the storms can’t go on forever.. can they?