Today was absolutely lovely. A bright blue sky with fluffy white clouds scudding across. The only sounds, apart from the birds calling and the occasional bleat of the sheep over the rustling of the breeze in the trees, were that of the fighter jets screaming around the countryside, hedge hopping over the hills and the throbbing of the search and rescue helicopter  practising to rescue downed pilots or holidaymakers attempting to cross the Atlantic on a lilo.

Oh well, you can’t have everything and if the Taliban ever invade the village down the road, we can rest assured they’ll be bombed into paradise before they can shout God is Great!

We were out for much of the day but on our return I nipped up to the veg plot to get some carrots. Now it’s quite ironic that having a whole field to play with, the only successes in our first year are things grown in containers.

The carrots are being grown in slices taken from some plastic barrels, about 12 to 18 inches high and 24″ diameter. The containers have upturned sods in the base and are then filled with a mixture of about two thirds multi-purpose compost and one third sharp sand.

The seeds were then just scattered thinly over the top and a light dusting of compost scattered over to cover. Apart from watering a couple of times, they’ve not had anything done to them. Normally I would thin out a few weeks after the fern started to show but I didn’t get around to it.

Each barrel slice had a different variety of carrots and today I harvested the French variety Touchon. From the one container I got just over 3.5Kg of carrots. If I bought these as ‘organic’ carrots they’d have cost me around a fiver. Take off  25p for the seeds (One packet would easily cover 10 times the area) and a pound for the compost and sand (which will be reused anyway) and we’re still into a healthy profit. 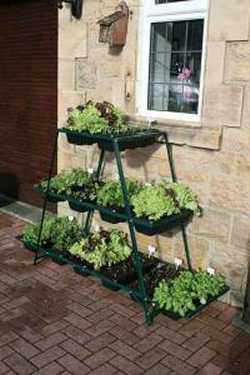 Now I’m not growing as a business, but it goes to show that even on a ‘cheap’ staple vegetable you can save a lot of money by growing your own. That’s without even thinking of the lack of ‘food miles’ and carbon footprints.

Each barrel slice has about 3 square feet of area, which is hardly anything. Even the smallest garden has room for a couple of large pots. Using a patio planter stand like this one from Harrod Horticulture that my daughter uses on her small patio you can make a significant contribution to your food supply. So long as the chickens don’t get onto the patio, that is!

If you don’t fancy paying out for purpose made racking, then I suppose you could knock something up from scrap wood to hold some pots and troughs. Incidentally, rather than pay a fortune for large pots, ask in supermarkets that sell flowers if they have any of the pots they come in for sale. A few minutes drilling holes in the base and you’ve some good large plant pots.

8 comments on “Carrots Grown in Barrels”