It’s been a busy old week here in the wet west. Last Saturday I attended the executive committee meeting of the National Vegetable Society. It’s a fair old drive from here to Preston and as always seems to be the case when you’re stuck indoors, a lovely sunny day.

Our company has run the website for the NVS for some years starting before I was asked to join the committee but suddenly some members felt my company’s relationship with the NVS was incompatible with my being a committee member and trustee. This only left me with one option, resign.

I’ve mixed feelings about this to say the least. I’d like to think I’ve made some positive contributions to the society over the years and helped it develop. On the other hand, I won’t miss the meetings and internal politics.

We’re very lucky to have met and made friends with some wonderful people via the internet and this web site. Since we moved we’ve had visits from forum members; Noshed, Digger Dave, Peapod, Aunt Sally, Grannie Annie and JayG.

On Tuesday our good friend Richard Cannon from Down the Lane came for a visit. I was a bit worried about how he’d cope with our weather being spoilt as he is down in Kent with its warm days and balmy nights. Mind you, he’s a tough cookie. His last holiday was a cycle ride from John O’Groats to Land’s End!

Being serious, I find myself positively jealous when I watch the weather forecasts on the telly. There’s the north and west, usually raining, windy and cold and then there’s the south and east wandering around in T shirts and shorts. Even when it’s good weather across Wales we seem to be the one place with showers in this north west corner.

This isn’t all bad news though, for a start we don’t worry about a lack of water. I’ve been thinking of organising coach trips from here to London in the summer. We’ll all take bottles of rainwater and wave them at the southerners crying “Loadsa water!” like Harry Enfield used to shout “Loadsa money!” 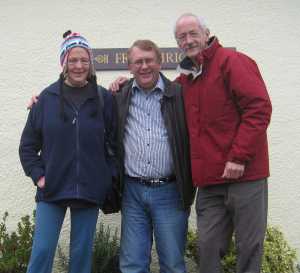 Wednesday we went to Pwllheli market. It’s very good with everything from clothes to tools and some food stalls. I picked up some goat cheeses from Richlin Dairy Goat Products. Not cheap but very nice and when have you seen photographs of the goats that gave the milk that made the cheese in your supermarket? Or dealt directly with the producer. One of the hidden costs of the cheap food we enjoy is that we’ve lost the connection with the producer. That knowledge of provenance.

On Thursday Val took Richard to Portmerion (the village where the TV series The Prisoner was filmed) We’ve been 3 times this year and I didn’t feel like going again so stayed at home.

Whilst Val dragged poor Richard around the shops, a fate worse than death, I collected up some of the wood from around the holding. The thin pieces make good kindling to get the fire going and the thicker pieces keep it going.

One wood you might not think of as firewood is hawthorn. It’s time consuming to prepare, being twisted with lots of twigs coming from the stems but it doesn’t half burn well.

I bought an electric chain saw from Lidl a few months ago and it’s such a time saver. I’m happy enough using it to saw up branches and logs but I think I’d want all the protective gear and some training before trying to fell a tree. Effective tool but wicked!

We dropped Richard off at the train station in Bangor – he was back in Kent in 4 hours!! On the way home we dropped into B&Q. I bought a Stanley sortmaster box which is a plastic case with compartments for screws etc. a month ago. Very useful indeed and I thought I’d pick up a couple more. Now are you sitting down? 1 box is £6.98 but you can buy a pack of 3 for £29.87 – roughly £10 each. Huh? Anyway, picked up 2 and they came through the till at £5.00 each.  Result!