Not Enough Hours in the Day

There’s just not enough hours in the day recently. Not only are the days shorter but I’m really busy with work so grabbing time on the plot is not easy.

I did manage a couple of hours on Monday and got the second of the five deep raised beds finished. Finished digging it over, fixed the uprights that will carry the cross bars to support netting or fleece and then filled it with compost.  I overfilled it actually because I know it will sink over the winter.

A quick trip down on Tuesday where I cut up some planks for the rest of the beds and that was about it. The chairman of our local branch of the NVS came over in the evening and we had a chat about the schedule for the local association. Our next meeting has David Thornton coming to talk about using fertilisers. David is a wonderful grower and won third prize in the recent national championships for his collection of five vegetables, second prize for long pointed carrots and second prize for large exhibition shallots (he was robbed!). Just getting onto the table at that level is a result in my book, so he really knows what he’s talking about.

If you’re not too far from us in Crewe, why not pop along? It’s free and non-members are very welcome. More information on the Crewe & Nantwich National Vegetable Society web site. 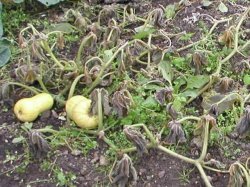 Wednesday was a sunny morning so I waited for it to go cloudy and miserable before sneaking down for a break on the plot. It was a bit of a disappointing visit really. My last hopes of getting some squash were dashed. There were a couple of squash that I hoped would develop and ripen before the season ended but it was not to be. I know I was late getting them in but with the weather they never really got started until September so it’s “nil points” for squash.

Back over to plot 29 where a short row of carrots looked promising but they really weren’t up to much. Quite a lot of damage and although the first one in the row was a respectable size the rest were not as big as I hoped.

Onto the parsnips. Now I’ve been really looking forward to these. The first one in the row was about 5″ in diameter so I expected a monster. Well he was about the same depth, a cylinder rather than a cone. I harvested another five and there was not a one that was parsnip shaped. The soil isn’t bad quality here, deeply dug and quite friable so I think I’ll blame the variety, Avonresister, that I haven’t grown before.

Still, it’s what they taste like that really matters. I’ll cut the nibbled bits out of the carrots and mix with the same quantity of parsnips. Quick cook in the pressure cooker and mash with butter and pepper then freeze in portion sizes.

Finally I dug up one of the Jerusalem artichokes. I got about 5 kilos from the plant, which I don’t think is bad at all. It’s never all good news or all bad news with growing.