I went up to the plot on Friday to make a start on the raised beds. First thing I noticed was the site was empty but the gate unlocked again. Somebody is being a right idiot. It was absolutely beautiful, a real hard blue sky and sunshine so I took a few photographs. I thought it might be useful to show what happens to cabbages when you don’t net them so feeding the pigeons and my neighbour’s plot gave the perfect example.

It’s a bit tricky getting everything level when you’re on your own. One of those jobs where an extra pair of hands would have been welcome.

I needed to make one of the short sides slightly deeper as the plot not only slopes down towards the compost heap but also has a slope from side to side.

Well here’s John’s DIY tip of the week. When hammering a six inch nail into wood it is well to ensure the hand that is not holding the hammer is not in the possible impact zones.

The hammer head slipped off the nail and went bang onto my finger. It’s a good job I was on my own on the site as I commenced a sort of war dance complete with shouting in Anglo-Saxon.

I actually got away without much damage apart from a huge blood blister and missed the nail although I felt quite sick afterwards. Knowing when to quit, headed home.

Saturday was the National Vegetable Society up in Preston. Usually I go by train but they’ve changed the timetable so I drove since it’s an hour and a half maximum by car but two and half by train including getting to the station now. I don’t know if it is my perception or if people are just driving more stupidly, but I don’t enjoy driving anymore. The first junction onto the main road I started to pull out when a lorry hurtled into view around the bend going a lot faster then the 40 mph speed limit. Slammed into reverse and let him zoom past. If my wishes come true he’s not going to have a happy day.

I can’t really discuss the meeting, but I wished I’d been on the plot instead of it. A committee seems to accomplish in inverse proportion to the number of members.

Sunday was not bad again, so after a few jobs at home I got down around three o’clock and continued with the second deep bed. I don’t know why but it seemed to take ages. Get one bit level and the other went out of true. Much back and forthing before it was actually level, square and true.

I’ve still got to put the bars up that will support netting but it was going dark. The days are a lot shorter now and the clocks will be changing soon so I’ll have to get around to the plot much earlier if I’m to get anything done.

I began digging over in the bed prior to adding compost but I only got halfway down before it really was silly to carry on. For some reason everyone else had already gone. Real diggers do it in the dark!

The photo below is an extreme example of the damage pigeons can do to cabbages if you don’t net them. There are more on the allotment photographs section. 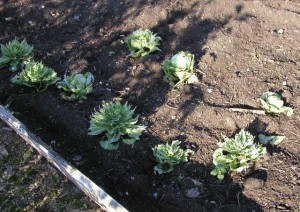