Well after the promise that was April, May has been a bit of a disappointment to say the least. It’s colder, wetter and windier than April. We’ve had some quite incredible winds this week. I know they were supposed to be worse up in Scotland but our elevation and clear openness to the sea means we catch the worst of it.

The storm started about 5.30 am on Monday but was passed by afternoon, which ended the day with a spectacular sunset. On Tuesday, the builders were hard at it despite it still being a bit windy, applying another coat of render to the end of the house. When they finished for the day, they had a wheelbarrow half full of cement left over that I put to good use.

When the cowsheds were renovated I planned on collecting water from the roof. The water is being stored in butts which need a firm level base to stand on. Luckily we’ve no shortage of rocks, so they formed the base and I then used the concrete to fill the gaps between then and to form a level support for a sheet of slate on which the butts will sit.

Originally I intended to use my old blue barrels from the Crewe allotments. Now there was no technical reason why I couldn’t use them but they looked awful against the stone cowsheds that we’ve spent a small fortune renovating. So I went wild and invested in a couple of green water butts on stands to store the water in. 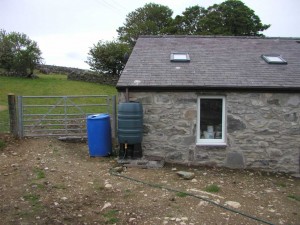 The two butts are to be joined and together give nearly 100 gallons (420 litre to be precise) of stored rainwater. I’ll see how we go this year, but I think that should be enough for our needs. We’ve got mains water and I’ve still got to check out the well, which I think may still be working, as an alternative water source. Incidentally, how come 2 identical products, ordered from the same company don’t arrive on the same day? One of those mysteries, I suppose.

From the photo you can see the base, the first butt in place and the old blue butt. The blue butt will still be used but I’ll find somewhere more discrete for it to go.

Back in the shed I’ve constructed another bay of shelving so I can get all my pots sorted out. I’d run out of 2×1 battens but the builders came to the rescue again as they’d some left over on site saving me a trip to the merchants.

I’d totally underestimated the time it would take to get sorted when we moved. The thing is that you accumulate things over the years and fit them in as you go. When you move, all those bits and pieces need to be found a home in one go. For the first time since we moved, I feel on top of things.

That’s not to say the ground is ready, that’s going to take at least 5 years to reach the same condition as the old allotments. Of course, I could have the soil in good order by buying in a load of topsoil in a matter of a week. But that’s not what gardening is about. Any fool can throw money at a problem, but improving with compost and organic matter means I’m creating something. Making the silk purse from the sows ear takes time but it is satisfying.