We’ve got Japanese knotweed in the walled orchard. I wasn’t quite sure if it was or not but our neighbour confirmed that it is. I’ve never actually seen this in the flesh before although I’ve seen pictures in gardening magazines and on the web of course.

Now for those who don’t know, this is probably the worst weed in the UK. I used to moan about mare’s tail on the allotment which was a bee to get rid of. In fact I never succeeded in completely eradicating it because it was on other plots and the paths so each year would suffer small outbreaks.

The most effective weedkiller I found for anything was ammonium sulphamate. Not only did it work really well, it was chemically simple being a crooked version of the nitrogen fertiliser sulphate of ammonia. It worked on the weeds in a similar way to carbon monoxide on us.

Because it was so simple and similar to the fertiliser, I felt it was the safest weedkiller from an environmental and health point of view. It’s no longer licensed as a herbicide and so we fall back onto glyphosate, a much more complex chemical which some people claim isn’t as benign and safe as the manufacturers would have you believe.

Of course you can still buy ammonium sulphamate as a compost accelerator but it’s not legal to use it as a herbicide and I certainly wouldn’t suggest you do so or admit to using it as such if I did! I suppose it’s still legal to accidentally spill it on a weed though.

Anyway, back to Japanese Knotweed. This was imported into the UK by the Victorians as both a decorative plant and a potential cattle feed. It’s also got other uses but the problem is it grows like mad. Like an iceberg, there’s more underneath than on top.

The roots can go down 3m and spread out 7m – that’s over 20 feet!! Like mare’s tail, the plant can re-grow from a small amount of root and so digging it up is not an option for the home gardener without a JCB 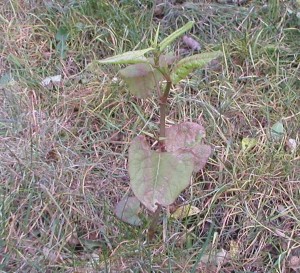 So noxious is this weed that it is considered hazardous waste and should only be disposed of at licensed refuse sites. It is an offence under section 14(2) of the Wildlife and Countryside act 1981 to “plant or otherwise cause to grow in the wild” any plant listed in Schedule nine, Part II to the Act, which includes Japanese knotweed. Over £150m is spent annually on Japanese knotweed control, and a decision was taken on 9 March 2010 in the UK to release into the wild a Japanese psyllid insect, Aphalara itadori. Its diet is highly specific to Japanese knotweed and shows good potential for its control. (Thanks wikipedia)

For now I’m spraying it with very concentrated glyphosate (about twice usual strength) and hopefully can start to knock it back. The reason for using weedkiller is that you need to take out the whole plant, just chopping off the bit above ground is not going to work.

If the glyphosate isn’t effective then I may have a compost accelerator accident.