Yet again I’m getting emails accusing me of being some sort of environment destroying chemist in the pay of the Illuminati or some chemical manufacturing multi-national combine. And other emails telling me I’m ignoring the benefits of science to be part of the trendy organic movement.

I suppose it’s too much for them to just email each other and stop wasting my time!

Once and for all, so I hope, I’m an ordinary grower not the figurehead of any movement either pro or against the organic movement. I strongly believe that we need to reduce chemical usage and work with nature rather than against it, but don’t lets throw away the benefits of science either.

To me gardening and growing your own is a matter of going against nature though. Left to itself, with no interference from people, our gardens and allotments would become scrubland and forest. No brassica, pea or carrot can compete with nettles and dandelions. The weeds have been developed by millennia of natural selection to merely reproduce themselves. Our crops however have been moulded by mere hundreds of years of selection by man to feed us.

There’s nothing natural about organic growing either. Nature doesn’t make compost or dig up the weeds! It’s a different way of manipulating and controlling nature that doesn’t generally involve the use of artificial chemicals.

I had the honour of meeting Lawrence D Hills, the founder of the HDRA that transformed into Grow Organic, back in 1978 or 1979 (I think). He was arguably the most important person in the organic gardening movement’s development. We discussed the pros and cons of organic growing then. As I recall, and it was a long time ago, his approach was one of looking for methods less damaging to the environment than the chemical approach.

There was no sentiment or nonsense in his approach. He believed in proper scientific trials to measure the effectiveness or otherwise of organic growing methods. He saw the risks and long term problems that treating the soil as merely a physical support for a limited range of chemical nutrients would bring but appreciated the need for productivity if the world was to be fed.

At the same time, in those days at least, he was willing to countenance the careful use of artificial fertilisers to balance the nutrient levels in the soil or to boost an ailing plant. Even the use of weedkillers and pesticides in some circumstances wasn’t cause for burning the culprits at the stake. It was the wholesale use of those chemicals without regard to the environmental or health consequences he was adamantly opposed to. 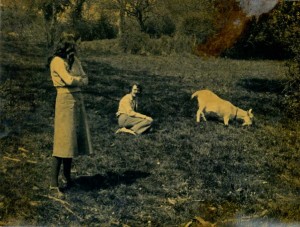 Now the organic guardians approach is that you either follow their rules to the letter or you aren’t organic. The ‘you can’t be a little bit pregnant’ approach. So I’m not organic although, I think like most real gardeners, I try to be organic in my approach.

Now, to lighten the mood and hopefully make you smile, on the right is the only photograph I can find of that holiday where we visited Bocking and met a very special person.