Intruders on the Allotment, Sorting the Greenhouse 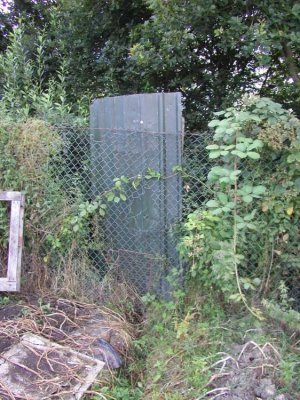 Larry came round and we discussed the intruders on the site. Apparently a bunch of kids have found the only spot on the back fence where it’s not six feet deep in stinging nettles and climbed over. They cut a foot hold in the chain-link to climb on so Larry had found a metal sheet on one of the plots and the owner had donated it to patch up the fence.

Armed with portable drills, thick wire and a few tools we fixed the sheet to the fence making it near impossible to climb over. I managed to rip my hand on the wire, so I can genuinely say that I’ve shed blood tor the allotment.

The side fence backs onto woods which have a  thick carpet of brambles and tall stinging nettles, except for the path to this bit of the fence so hopefully we are reasonably secure from youngsters bent on trouble.

They didn’t do much damage on their visit but these things tend to escalate if not nipped in the bud.

We had a walk around the site between the odd small showers of rain and put the world to rights as well as discussing how things were going.

Larry’s sweetcorn is a bit sad, small plants that don’t look as if they’ll amount to much whereas mine is looking very good. His tomatoes and peppers are doing very well though.

Bit of a mixed bag for most of us this year.

The last surviving San Marzano  was doing so well in the large greenhouse but it’s been struck down with the blight. I’m calling it a blight but I’m not so sure it is potato blight, certainly some sort of mould infection though. 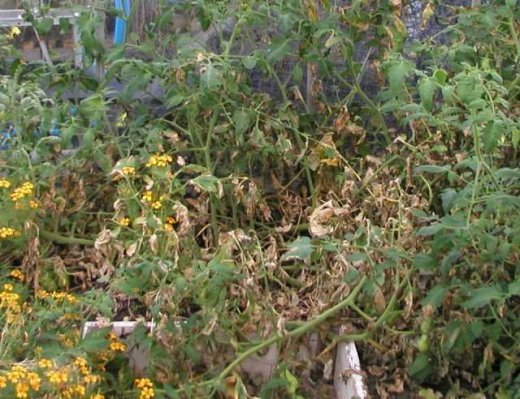 This gave me some extra space, of course so I moved some of the peppers in large pots over. This gives them all more room to develop but I couldn’t move some plants because the roots have gone through the holes in the bottom of the pots into the border.

Popped some canes in to support the peppers as the fruits are swelling and they will get pretty heavy. I also noticed some small aubergines developing

Luckily I had returned home when the sky darkened and then we had a cloudburst and thunderstorm. It started with lightning and hail then as the storm was overhead the power shower in the sky turned on, overwhelming the drains.

I’m not certain and it hardly seems possible but I think we had 60mm of rain in a couple of hours. I can better understand the nightmare of being flooded. When I realised the patio was under 2″ of water, the drain couldn’t cope and it was approaching the level of the back door a feeling of panic sets in. Surely it can’t rise more? What to do? The cat looked pretty unhappy about it as well!

The rain slowed down and with a feeling of relief I realised leaves etc were drifting to the drain and it was going down. There’s a photo of this amongst others here

Leave a Comment Here on Intruders on the Allotment, Sorting the Greenhouse Cancel reply