Saturday was another blistering day so I spent it sitting with a good book and lots of cold drinks hiding under a sun-shade on the patio until the series finale of Dr Who. Hey, I’ve been watching since he was William Hartnell and I was 8!

Afterwards I headed down to the plot for a couple of hours, which was really quite pleasant things having cooled down. I harvested a couple of pounds of strawberries whilst clearing the weeds from the beds.

Since the site was pretty quiet, I actually got the sprinkler going on plot 5. Now sprinklers can be quite wasteful but mine can be controlled quite well to get the water where you want and evening watering means the water soaks in rather than evaporating in the heat.

I’m hoping but not hopeful that we’ll avoid a hosepipe ban here. Knowing British weather, we’ll have the ban but it will be OK as it will pour with rain for the rest of the summer.

At home, it’s quite easy to install a rainwater diverter on the guttering downspout and store in water butts but on the allotment that’s not so easy. At best the collection area for the water is a shed and a greenhouse.

Putting pressure behind the water is going to mean a pump and that realistically means electrical power – once again not usual on an allotment. Although soaker hoses usually work well on low pressure, so you can run them off a water butt.

Even if you can collect enough, storing enough water to make a real difference in a prolonged drought isn’t easy. After all, the butts take up space and often cost money. I’d love to know where all the blue barrels around our site came from, thanks to whoever donated them.

Another scorcher and we were off to Bury agricultural show. We’d arranged to meet a few people from the forums by the alpacas but the alpacas hadn’t shown. So we spent half an hour looking and asking before we realised there were no alpacas.

We managed to ring those up whose mobile numbers we had and get them to announce allotment vegetable growing were now meeting in the beer tent but only those we phoned showed. So if you were there, sorry we missed you!

Val brought some jam butties along (as promised) and enough sandwiches to feed everyone for a week but, of course, everyone brought their own anyway so I nearly broke my back carrying them all back and forth. This week we’ll mostly be eating sandwiches!

The show itself was a bit of a disappointment. The horsey crowd were well represented and there were some rather special cattle on show but not much else, apart from some rather good looking sheep, Texels, on show (that sounds bad!). Quite strange faces actually, a bit like a dog.

The horticultural competition was pretty sparsely entered. It’s a shame really, at one time local shows were so well attended but now some classes don’t have any entrants at all.

Still it was fantastic to meet up with some of the AVG crowd.

Even more disappointing was the performance of that joke we had as a football team in the world cup. We got home with 20 minutes to go and couldn’t believe the score. After watching the remaining bit of the match, it was all too believable.

I’m no great football fan or expert but even I could see we were totally outclassed. Are these guys really worth the millions? Perhaps having an England manager who can hardly speak English isn’t the cleverest idea.

Thank goodness I didn’t suffer the embarrassment of watching the whole match. I wouldn’t have been surprised to see them crowd around the goal and hope a fleet of little ships would come and rescue them like Dunkirk.

Maybe the players could start a fund to compensate the fans who paid to go to South Africa from their inflated wages. And pigs might fly. 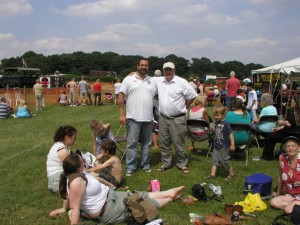 Standing: Me (with hat and tum looking a sweaty mess), Poet & Author Andrew Climance.
Various lovely children, Mrs Climace, Mr Kate (without her ducks) and Val nearly off shot. Cara is behind the camera and Mr Kate’s partner is off shot.