Stopping the Rot in Potatoes

Once again it’s raining. Here in the paddy fields of Cheshire we get more than our fair share normally but this year I suppose everyone is in the same boat. Or  thinking about a boat before we all go under the water.

We’ve had nearly one and a half inches of rain this week and it’s still coming down as I write. Pretty pointless going down the plot in this. Apart from watering the things in pots in the greenhouse, nothing much else can be done. I think the tomatoes in the border are down to the water table anyway so perhaps they don’t even need watering. Not going to take the chance though.

The cats keep checking the weather, it’s raining in the back so maybe the front is sunny. No. Tell the humans to turn it off. Our new cat Squeek has only recently discovered the outside world and he’s convinced this rain is our doing. Actually hissed at it this morning.

Lots of people are suffering potato bight this year.  The weather conditions are to blame, of course. Technically blight is most likely during a Smith Period. Blight forecasting has often been based on the occurrence of “Smith periods”. A “Smith period” is a 48 hour period in which the minimum temperature is 10°C or more and the relative humidity exceeds 90% for at least 11 hours during the first 24 hours and for at least 11 hours again during the final 24 hours. However, any period of warm, humid weather increases blight risk.

Usually blight is not a problem with first and second early potatoes but it is often a problem with maincrop potatoes. I’ve just updated an article on potato blight if you want more information.

Anyway here we are with all our early potatoes harvested and the ground has been so wet that some are starting to rot. I don’t think we have actually had blight as the maincrop King Edward are not affected although the haulm had gone down on the earlies. Normally we spread an old shower curtain on the lawn an pick over the potatoes, discarding the damaged and diseased and allowing the sun to dry them thoroughly before storing away in sacks in the shed.

This year the lawn is sodden and so that’s out. Just to add to the fun our back shed, we’ve two sheds next to each other, is leaking and some of the sacks are rotten. Woodlice appear to have been eating them as well. More of a pest than you think, woodlice.

Just a quick aside – some years ago we were selling a house and I noticed quite a few woodlice in the porch, They were coming and going through a crack in the brickwork so I sprayed it with cat flea spray. Thought no more about it until the doorbell went and the first people to view the house were at the door. Our red tiled porch was grey with thousands of dead woodlice. I think it put them off!!

So, back to storing our potatoes. Larry has kindly offered us some paper sacks which resolves the storage problem. Still leaves us how to dry them out.  We’ve got them spread out on the kitchen floor and Val’s been wiping them off with kitchen roll. If we bag them wet then rot will ruin the lot so it is either that or dump the crop. We’re not doing that, thank you.

When Larry came round  with Gaynor there was much discussion and we decided washing them was actually far easier. Drying them out on sheets of newspaper to absorb the moisture. We decided not to dry them off in the tumble dryer.

So this is Val cleaning potatoes in the kitchen. You don’t have to be mad to be self sufficient but it helps. 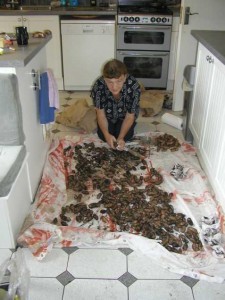 2 comments on “Stopping the Rot in Potatoes”