OK,  I’m officially mad. I couldn’t take any more so I went down to the plot late afternoon.  Strangely enough nobody was on when I arrived, although, even more strangely I did see two other plotholders briefly on site.

Today has been a mixture of drizzle, really heavy rain and sunshine for very brief intervals. When I say heavy rain, I mean overwhelming the guttering and the road grids heavy.  Since last Friday we’ve had over three and a half inches of rain now. June, I heard was officially the wettest June ever, having beaten the 1914 record.

That’s two weather records broken this year so far and if this rain doesn’t stop soon, maybe three.  The ground is so sodden that there is nowhere for the rain to soak away and so it’s just lying on the ground.

The climbing beans I planted are failing. I’ve never failed with runner beans before but it looks like this year will be it. Usually it’s hot dry weather that kills them so ironic that they are drowning.

Between plots 29 and 28 the path slopes down about three inches and that’s now a deep puddle. Having to find routes around the water to reach the shed and my Wellington boots. This is July?

So there I was, back and forth to the tap to fill the watering can with my hood up and the rain coming down. But, it’s dry in the greenhouses so things needed watering. Trimmed a few sideshoots and tied up some of the tomatoes which are doing well in the large greenhouse. I’m not sure they need watering as their roots are probably down enough to be into the standing water below the borders.

I’d had a space in the rear border into which I planted a San Marzano bush plum tomato. It seems to have gone berserk and is about twice or more the size of those planted outside. I think a combination of the warmth in the greenhouse, the nutritious border soil and the available water has provide it ideal conditions. See photo below. I took a couple of shots of the waterlogging on the plot which you can see on Allotment Photographs for July. 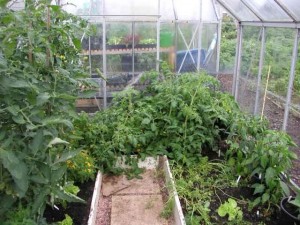 Since it looks like we’re going to be short of runner and climbing beans and I’ve composted the dwarf French beans, decided to sow another lot into pots. It’s not too late for them and hopefuly the rain will have stopped when they have shooted, I sowed two per pot and will thin to one assuming both germinate. 24 Roquencourt (yellow, waxy beans) and 24 Tendercrop. It’s too late to have a hope with Borlotti beans now.

It’s supposed to be dry tomorrow so I hope e I can get a row of potatoes up and plant the leeks out. Fingers crossed.