The weather continues to be confused, despite me shouting “It’s summer! Summer!” at the sky. Perhaps this lockdown stuff is getting to me. Still, we’re getting lots of crops in and a lovely pear surprise. 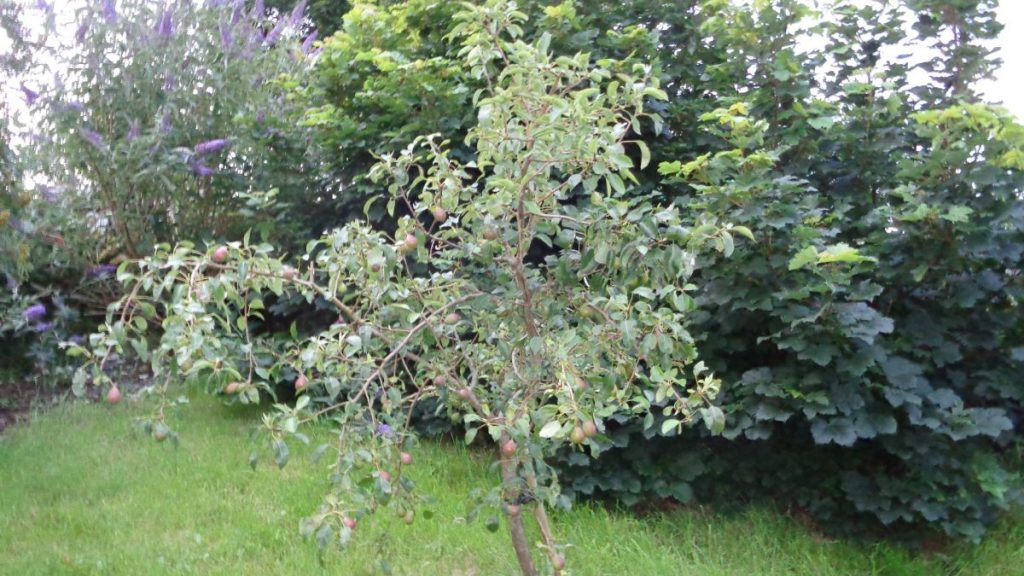 Finally, you wait for years and nothing then a load of pears come along.

When we moved here some 10 years ago, one of our aims was to have some fruit trees. Apples, pears, plums, damsons and cherries. The thing with tree and bush fruit is that you can get a really amazing return for little effort.

The important thing is to put the work in at the start, when planting out. Preparing the soil and planting carefully will pay dividends in the future. Once they’re away, a bit of pruning, a bit of pest control and prevention and adding a little fertility is all you need to do.

The big problem we have here is altitude and exposure. Because we’re high up at 600 feet above the sea, it’s cooler here. The difference between here and the coast is usually around two degrees Celsius. We’re in a windy area anyway, being high up and exposed means we get the full force of Atlantic storms sweeping in from the coast. Strong winds and high humidity combine to produce a wind chill that further knocks plants back. (Add sad violin music in the background)

So far we’ve managed a few apples from our Bardsey apple. In fairness that hasn’t been helped by marauding sheep who seem to prefer eating anything in preference to grass. Not a damson or plum has been seen yet, but we live in hope.

I had three cherry trees. Two Morello types outside and an eating cherry in the polytunnel. We’ve had blossom on the outside cherries once but never a fruit. The tree in the polytunnel managed one single cherry after a fair amount of blossom. That was when I decided I could better utilise the space and grubbed it up. 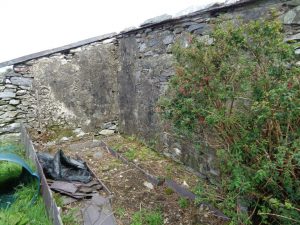 Used to be a greenhouse I think – possibly good for cherries

I do have a cunning plan to get some cherries here though. The old pigsty that was converted into a shed has a high back wall onto which a greenhouse was attached way back when. It’s south facing and sheltered to seaward by the high wall of the walled vegetable garden.

I don’t think it would be a good idea to restore it as a greenhouse. I really don’t need another one apart from anything else. But if I prepare the ground well it could be just the place to grow a couple of sweet cherries.

The big surprise this year has been the pear tree, To be honest, I’d almost forgotten it was there. Then Val called me over and it has pears! Loadsa pears. 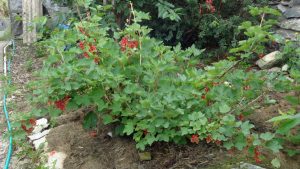 Redcurrants – and this has been picked over twice already!

Our blackcurrants have excelled themselves this year, I think we’re measuring the crop in tons now! The redcurrants are none too shabby, either. That’s despite not having been netted against the birds. Very decent crop of Jostaberries to round it off.